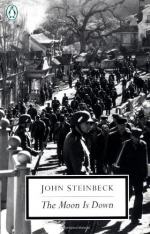 The Moon Is Down Summary & Study Guide

John Steinbeck
This Study Guide consists of approximately 26 pages of chapter summaries, quotes, character analysis, themes, and more - everything you need to sharpen your knowledge of The Moon Is Down.

The Moon Is Down Summary & Study Guide Description

The Moon Is Down Summary & Study Guide includes comprehensive information and analysis to help you understand the book. This study guide contains the following sections:

This detailed literature summary also contains Topics for Discussion and a Free Quiz on The Moon Is Down by John Steinbeck.

The Moon Is Down is the story of the invasion by foreign soldiers of a small town in Europe. The name of the town and country and the timing of the event is not provided. In a matter of a few minutes, the lives of the townspeople are turned upside down. The town had been a democracy where all the people were free. After the invasion, the people now have to answer to gun-toting, helmeted strangers.

Colonel Lanser, the leader of the invaders, meets with the leader of the town, Mayor Orden. The Colonel asks for the Mayor's cooperation in getting the people to accept the invasion in an orderly manner. The Mayor responds that he cannot agree to the Colonel's proposition since he was elected by the people who can therefore remove him from office. He must adhere to the voices of the town. The Mayor is appalled to learn that Mr. Corell, the town's shopkeeper, had been in collusion with the foreign army prior to the invasion.

The Colonel is an uncharacteristically gentle and understanding man and allows the Mayor to stay in his position while still urging him to listen to reason. He tells the Mayor that the townspeople will be working the coal mine for them, and they will be shipping the resource back to their homeland.

One of the Colonel's officers is murdered by a mine worker who refuses to obey his orders. The man who committed the act is tried and found guilty of murder. The Colonel has him executed at the town square so the people can see what happens to those who resist the occupation. Later, when one of the young Lieutenants is smitten with the widow of the executed man, he meets his end. The widow stabs him to death with her scissors.

The Mayor, although removed from office by Lanser, is working with the underground. He gets a message to England, requesting that they be sent a supply of dynamite in order to defend themselves. Soon there are British bombers circling overhead, sending down tiny parachutes with small tubes of TNT attached, along with instructions on how to use the explosives. Hundreds of these packages are dropped and most are recovered by the town's children. The soldiers find only a few and turn them into Colonel Lanser.

The Colonel and his officers understand the risk they are under and are determined to rout out all the dynamite in the possession of the people. Mr. Corell has discovered that the Mayor was behind the subversive act which forces Lanser to arrest him. Explosions start occurring all around town. Lanser pleads with Orden to make the people cease these actions. The Mayor refuses—he could never ask the people not to fight for their freedom. The soldiers may win the battle but the people will win the war.

As the Mayor is taken away to be executed, he is assured by his friend, Dr. Winter, that the people will continue to fight for their freedom until they are victorious.

More summaries and resources for teaching or studying The Moon Is Down.

The Moon Is Down from BookRags. (c)2022 BookRags, Inc. All rights reserved.