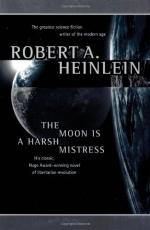 The Moon Is a Harsh Mistress Summary & Study Guide

Robert A. Heinlein
This Study Guide consists of approximately 66 pages of chapter summaries, quotes, character analysis, themes, and more - everything you need to sharpen your knowledge of The Moon Is a Harsh Mistress.

The Moon Is a Harsh Mistress Summary & Study Guide Description

The Moon Is a Harsh Mistress Summary & Study Guide includes comprehensive information and analysis to help you understand the book. This study guide contains the following sections:

This detailed literature summary also contains Topics for Discussion and a Free Quiz on The Moon Is a Harsh Mistress by Robert A. Heinlein.

The Moon Is a Harsh Mistress shows Lunar colonists rising up against Terran oppression and achieving a David and Goliath victory.

Mannie Davis, a computer technician, services Mike, a self-aware computer which controls most vital aspects of Luna, once an inescapable penal colony, but in 2075 home to 3 million free people. Luna Authority, however, continues to exploit them as slaves. Davis attends a political rally, meets beautiful activist Wyoh Knott and his old "Prof." Police sent to arrest the attendees are slain. After the melee, Davis, Knott, and Prof bring Mike into the conspiracy, form an "Emergency Committee of Free Luna," and begin organizing subcells. There is a need for urgency because Mike sees famine by 2082. Luna must fight Terra as David does Goliath, hurling rocks. Knott, a wanted fugitive, hides out at the Davis farm and is drawn into its line marriage.

To replace the slain police thugs, Terra dispatches "Peace Dragoons," who hate being sent and fear Loonies more than the Loonies fear them. The Revolution goes forward, optimizing its organization for security and communication, and Mike develops personality, becoming Adam Selene for Party matters and Simon Jester for political satire. The principal characters prepare to survive Earth gravity should a trip down be needed. After a meticulous build-up to Revolution, the seizure of power is sudden and unexpected. Tourist Stu LaJoie joins after surviving a faux pas and learning "Tanstaafl" ("There ain't no such thing as a free lunch"). He becomes the Party's Terran coordinator. When Peace Dragoons commit the unheard of crime of rape, the revolt begins. Nothing is ready, but leaders maximize confusion and control communications. Prof emerges as the tactical leader.

The revolutionaries become rulers, scrambling to perfect ad hoc defenses before the next scheduled ship from Terra. The conspirators' theoretical discussions of personal responsibility, capital punishment, and other issues, are put to practical tests. Word leaks of the coup, cutting short the preparation time. A Declaration of Independence is prepared and delivered by Prof and Davis, who negotiate recognition by the Federated Nations. The makeshift trip down is nearly fatal to elderly Prof, and working under six times normal gravity debilitates young Davis. Prof politely but firmly demands de jure recognition of the Free Luna State. Prof and Davis work the press, describing how Luna can meet all terrestrial food needs, provided Terra ships up, in return, the non-replenishable resources Luna needs. The emissaries return empty-handed, precisely as Mike and Prof hope: otherwise, conditions would not change and Lunar famine would occur.

Terra is goaded into a first strike, justifying Free Luna's "Operation Hard Rock." Terra is cavalier about the threat and bloodthirsty about retribution. Rocks hail down on precise targets, showing an ability to sustain damage, while a Terran attack on Luna is only partially successful. It becomes too expensive to hold the colony and too dangerous to hold out. Unity among the Federation Nations fails, victory is won, but Prof dies proclaiming it. Mike falls mysteriously silent. Nothing the amateur revolutionaries intend is accomplished, but life goes on.

More summaries and resources for teaching or studying The Moon Is a Harsh Mistress.

The Moon Is a Harsh Mistress from BookRags. (c)2022 BookRags, Inc. All rights reserved.