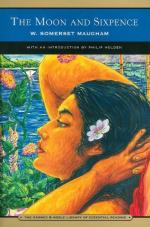 W. Somerset Maugham
This Study Guide consists of approximately 35 pages of chapter summaries, quotes, character analysis, themes, and more - everything you need to sharpen your knowledge of The Moon and Sixpence.

The Moon and Sixpence Summary & Study Guide includes comprehensive information and analysis to help you understand the book. This study guide contains the following sections:

This detailed literature summary also contains Topics for Discussion and a Free Quiz on The Moon and Sixpence by W. Somerset Maugham.

The narrator, Crabbe, knows a man named Charles Strickland for a few years, and many years later, Strickland becomes a famous painter. Crabbe decides to write a book about Strickland, and he talks about what he remembers of his experiences with Strickland. He also goes around Tahiti where Strickland lived his last years, and Crabbe hears the stories of various people who remember Strickland. For most of Strickland's painting career, he is anti-social, and considered by all to be without talent, so it is a great surprise when he turns out to be a painting genius.

When Strickland gets sick, Dirk insists on bringing him into Dirk's apartment to get better, against his wife Blanche's wishes. Dirk is destroyed when Strickland kicks him out of his own studio, and then Blanche decides she is leaving Dirk for Strickland. Dirk desperately wants to get back together with her, but after Strickland dumps her, she commits suicide. When Crabbe tells Strickland that he should feel guilty for what he did to Dirk and Blanche, Strickland expresses no remorse, but instead shows Crabbe his paintings. Crabbe is disappointed to find that they are nothing special.

After months of gutter poverty, Strickland manages to sail to Tahiti, where he finally settles and finds his painting style. In the island paradise, Strickland lives a happy, simple life, painting in his hut, and being taken care of by his Tahitian wife, Ata. When he learns that he has leprosy, Strickland tries to send everyone away, but Ata insists on staying and caring for him until his death. Although Strickland is blinded by his leprosy, he paints the walls of his hut until his death, and creates a jungle masterpiece. After he dies Ata burns the hut down.

More summaries and resources for teaching or studying The Moon and Sixpence.

The Moon and Sixpence from BookRags. (c)2022 BookRags, Inc. All rights reserved.