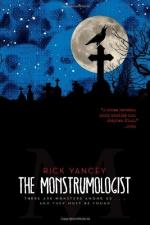 Plot Summary
+Chapters Summary and Analysis
Prologue
Chapter One: A Singular Curiosity
Chapter Two: His Services Are Indispensable to Me
Chapter Three: It Seems I Must Reconsider My Original Hypothesis
Chapter Four: The Hour Grows Late
Chapter Five: I Am Quite Lonely At Times
Chapter Six: What of the Flies
Chapter Seven: You Have Failed Me
Eight: I Am A Scientist
Chapter Nine: There is Something I Should Show You and Chapter Ten: The Best Man for the Job
Chapter Eleven: We Have No Choice Now
Chapter Twelve: The Devil's Manger
Chapter Thirteen: You Bear His Burden and Epilogue
Characters
Objects/Places
Themes
Style
Quotes
Topics for Discussion
Order our The Monstrumologist Study Guide

Rick Yancey
This Study Guide consists of approximately 49 pages of chapter summaries, quotes, character analysis, themes, and more - everything you need to sharpen your knowledge of The Monstrumologist.

The Monstrumologist Summary & Study Guide includes comprehensive information and analysis to help you understand the book. This study guide contains the following sections:

This detailed literature summary also contains Topics for Discussion on The Monstrumologist by Rick Yancey.

"The Monstrumologist" by Rick Yancey is a horror novel with a coming of age background that makes for a wonderful young adult novel. The book, set up as the journal of William Henry, follows Will's life as a monstrumologist assistant through one of Will's most harrowing adventures. Through it, Will discovers not only that monsters are real, but that sometimes, the human monster can be more dangerous than the creatures in the night.

"The Monstrumologist" is the story of Will Henry, a 12-year-old boy who was taken in by his father's employer, Dr. Pellinore Warthrop, when his parents both perished in a fire. The doctor is a monstrumologist or one who studies, hunts, and kills monsters. He is aloof and evasive at times, but he is all that Will Henry has and Will does admire his work, although it frightens him. At the opening of the novel, the duo is startled by the coming of a grave robber, who has found the remains of a monster, the Anthropophagi, a headless, human like creature with vast strength and murderous intent. Warthrop knows immediately this species is not native to America, and thus begins the hunt, not only for the deadly creatures, but for answers. After several deaths, Warthrop visits a man in a sanitarium named Hezzekiah Varner, who claims to have carried several of the Anthropophagi over from their native country. On their return home, however, the Anthropophagi escaped, and killed nearly the entire crew. When the police arrive to ask for Warthrop's help as others are being killed, Warthrop calls in John Kearns, a known Anthropophagi hunter. Kearns, although knowledgeable about the monsters, is somewhat a monster himself, believing that all actions are justified in order to eradicate the Anthropophagi, including the killing of human beings. With Kearns' help, Warthrop, Will, the local police, and volunteers set up a plan to kill off the monsters. However, when the alpha female escapes, the men are forced to go into the Anthropophagi tunnels to find and eliminate the creature.

Once the Anthropophagi are killed, Warthrop and Kearns seek out Dr. Starr, the man who helped Warthop's father feed and care for the Anthropophagi for many years. They learn that Warthrop's father originally wanted to mate the species with humans, but apart from that, he knew that to stop feeding the captive Anthropophagi would mean their escape. The Anthropophagi remained dormant for years only because Starr supplied Warthrop's father with victims for their meals. When Warthrop's father died and his money ran out, Starr stopped feeding the creatures, hence their rise to the surface and their deadly spree. Kearns kills Starr, and then vanishes, and Will Henry realizes that human monsters are just as prevalent, and dangerous, as those he works with. Through his journey, Will Henry and Warthrop become closer and Will learns that he must put his past behind him to move forward. The disease that was killing his father at the time of his death has also infected Will, but to his surprise, the worms that are inside him are actually prolonging his life. He lives to well over a hundred years, before he dies when his journals are found and the full story is finally revealed.

More summaries and resources for teaching or studying The Monstrumologist.

The Monstrumologist from BookRags. (c)2022 BookRags, Inc. All rights reserved.