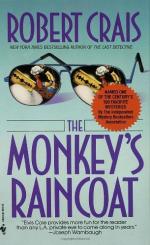 Robert Crais
This Study Guide consists of approximately 36 pages of chapter summaries, quotes, character analysis, themes, and more - everything you need to sharpen your knowledge of The Monkey's Raincoat.

This detailed literature summary also contains Topics for Discussion and a Free Quiz on The Monkey's Raincoat by Robert Crais.

The Monkey's Raincoat is the story of L.A. detective Elvis Cole, who is hired by Ellen Lang to find her husband and young son. Elvis discovers that Mort Lang has been killed by wealthy ex-bullfighter Dom Duran, because Duran believes Mort stole two kilos of cocaine. Perry, Ellen's son, is still being held hostage. Elvis tracks own the drugs and stages a raid on Duran's mansion to rescue the boy.

As the novel begins, Ellen and her friend Janet Simon come to Elvis Cole's office to hire him to find Ellen's husband Mort and her young son Perry. Mort was supposed to pick Perry up from school and never came home. Ellen knows that Mort has a girlfriend, Kimberly Marsh. Elvis begins investigating and discovers that Kimberly seems to have left town. Mort's business associate, producer Garrett Rice has not seen Mort since a Hollywood party a while ago. The rumor is that Garrett is into cocaine. Ellen's house is broken into, but she does not want to involve the police and get Mort into trouble.

At Ellen's house, Elvis finds a gun registration for Mort, but his gun is missing. He also discovers that Mort, a talent agent who recently moved from a big agency to his own agency, is on the verge of bankruptcy. Before Elvis can investigate further, the police call. Mort has been found shot to death in his car. Elvis goes to tell Ellen what's happen, but she never shows up. She is missing now, too, apparently kidnapped in a grocery store parking lot. Elvis stakes out Kimberly's apartment and follows a man who picks up her mail. He discovers Kimberly and a boyfriend Larry hiding out at a nearby house. Kimberly tells Elvis that the Hollywood party she and Mort went to was at the expensive home of Dom, a potential movie backer and former bullfighter. She slept with Dom, and there was a big fight among the men at the party. Mort warned her of trouble, so she is hiding out.

Dom is Domingo Duran, an ex-bullfighter with mob connections, and soon Dom's thugs kidnap Elvis. Dom says Mort stole two kilos of cocaine from him and demands that Elvis return the drugs in exchange for Ellen and Perry. Instead, Elvis follows one of Dom's men and rescues Ellen, killing two men in the process. Dom still has the boy, though. Meanwhile, Garrett Rice turns up dead, and Elvis investigates whether he's tried to sell any cocaine. He finds out that someone else has: Larry, Kimberly's boyfriend. Elvis goes to the house where Kimberly is staying and forces her to give him the drugs. Then he sets up a meeting to exchange the cocaine for Perry. Instead of Perry, Dom sends a squad of men to kill Elvis and Ellen.

Elvis evades Dom's ambush and breaks into his estate, where he, his partner, and Ellen interrupt a drug deal, foil a police sting operation, rescue Perry, and kill eleven men, including Dom. The police discover that Mort never picked up Perry at school. He saw men kidnapping his son and went after them with his missing gun, getting killed in the process. Ellen, who has grown independent through her experiences, heads forward toward the responsibility of caring for three children as a single parent.