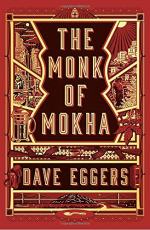 Dave Eggers
This Study Guide consists of approximately 36 pages of chapter summaries, quotes, character analysis, themes, and more - everything you need to sharpen your knowledge of The Monk of Mokha.

The Monk of Mokha Summary & Study Guide includes comprehensive information and analysis to help you understand the book. This study guide contains the following sections:

This detailed literature summary also contains Topics for Discussion on The Monk of Mokha by Dave Eggers.

The following version of this book was used to create this study guide: Eggers, Dave. The Monk of Mokha. New York: Alfred A. Knopf, 2018.

The Monk of Mokha tells the true-life story of a man named Mokhtar Alkhansali. Mokhtar was born in the United States and grew up in an impoverished San Francisco neighborhood known as the tenderloin District. His parents were immigrants from Yemen. As a boy, he was unruly, so when he was 13 years old his parents sent him to live in Yemen for a year with his grandparents. During that year, he developed admiration for Yemeni culture and for his grandfather’s extremely diligent work ethic. After returning to America, he worked sales jobs in department stores while attending high school. After high school, he briefly worked as a car salesman, but quit after witnessing his boss cheat a customer out of $1,000 on a sale.

Mokhtar unfortunately did not have enough money for college, so he worked various jobs. One day, in 2013, his girlfriend pointed out a statue in San Francisco that appeared to depict a Yemeni man drinking a cup of coffee. Mokhtar did some research and discovered that coffee brewing apparently originated in Yemen. Unfortunately, due to civil unrest in Yemen, the country’s coffee exportation had become minimal and produced beans of low quality. Mokhtar resolved to become a coffee exporter, working directly with Yemeni coffee farmers in order to raise quality and to raise wages for the farmers. Mokhtar began to study coffee a local breweries, and a local expert named Willem Boot helped Mokhtar secure funding for an exploratory trip to Yemen.

In Yemen, over a period of three months, Mokhtar traveled to every coffee farm in the country and collected coffee samples. He brought them back to the United States, and experts brewed and tested the samples for quality. With the support of investors, Mokhtar then returned to Yemen and visited the farm that had yielded the best beans. He began helping the farm improve its techniques for farming and harvesting. Meanwhile, Mokhtar looked for ways of processing and packaging the beans. He found that a major processing mill employed inhumane employment practices, so he established his own mill and hired employees away from the other mill by offering better pay and better treatment.

Unfortunately, just as Mokhtar’s business operations were beginning to culminate, civil war broke out in Yemen in January of 2015. Mokhtar was in Yemen with no clear means of escaping, as the U.S. government was doing nothing to help evacuate U.S. citizens from the country. Mokhtar needed to return to the United States soon in order to attend an important coffee conference. Carrying a case of coffee samples, he managed to board a small boat that brought him across the Red Sea to Djibouti. From there, he took a plane to the United States in time for the coffee conference. He soon acquired substantial monetary investment in his company. Soon after, his company began to successfully export coffee from Yemen despite the continuing civil unrest. The coffee produced by his company quickly became a critical and commercial success on an international level.

More summaries and resources for teaching or studying The Monk of Mokha.

The Monk of Mokha from BookRags. (c)2022 BookRags, Inc. All rights reserved.