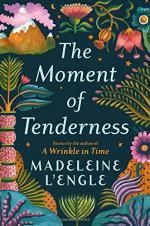 Plot Summary
+Chapters Summary and Analysis
"The Birthday," "Gilberte Must Play Bach," "The Mountains Shall Stand Forever," "Summer Camp"
"White in the Moon the Long Road Lies," "Madame, Or...," "One Day in Spring," "Prelude to the First Night Alone"
"Please Wear Your Rubbers," "A Room in Baltimore," "Julio at the Party," "The Foreign Agent"
"The Moment of Tenderness," "The Foreigners," "The Fact of the Matter"
"Poor Little Saturday," "That Which Is Left," "A Sign for a Sparrow"
Free Quiz
Characters
Symbols and Symbolism
Settings
Themes and Motifs
Styles
Quotes
Order our The Moment of Tenderness Study Guide

Madeleine L'Engle
This Study Guide consists of approximately 58 pages of chapter summaries, quotes, character analysis, themes, and more - everything you need to sharpen your knowledge of The Moment of Tenderness.

The Moment of Tenderness Summary & Study Guide includes comprehensive information and analysis to help you understand the book. This study guide contains the following sections:

This detailed literature summary also contains Quotes and a Free Quiz on The Moment of Tenderness by Madeleine L'Engle.

The following version of this book was used to create this study guide: L’Engle, Madeleine. The Moment of Tenderness. Crosswicks Ltd., an imprint of Grand Central Publishing, 2020. First edition.

The Moment of Tenderness is a collection of short stories written by Madeleine L’Engle, compiled posthumously by her granddaughter, Charlotte Jones Voiklis. Each story features a different protagonist, taking place in different years and locations. However, each story overlaps thematically, and the collection begins with stories with child protagonists and ends with stories with adult protagonists. One town—Mt. George, Vermont—is the setting of two stories, and the implied hometown of one character in a third story. Therefore, by the end of the collection, the reader has a strong sense of what concerns L’Engle emotionally, what stirs her soul, and what human questions she deems important enough to address.

“The Birthday” begins the collection, telling the story of a young girl whose birthday is almost ruined by her parents’ absence. In “The Birthday,” Cecily Carey almost throws a temper tantrum not only at the realization of her abandonment, but by the thought of being universally uncared for—until her faith saves her.

“Gilberte Must Play Bach” is the next story, telling the story of Claudine, a little girl whose father drinks too much and whose mother, Gilberte, obsessively plays Bach. Like Cecily, Gilberte is a very lonely little girl.

“The Mountains Shall Stand Forever” tells the story of Ellen, a lonely schoolgirl, who writes a letter to her father asking him to take her out of school. She fantasizes about solitude to get through the days.

“Summer Camp” tells the story of Lise, a young camper, who has no friends and even rejects the friendship of a kind, older counselor. Like Ellen, she clings to her loneliness.

“White in the Moon the Long Road Lies” tells the story of Selina Williams, who is about to move from her small, southern hometown in Georgia to become a schoolteacher in the north. She is on the brink of becoming a young woman.

“Madame, Or…”’s titular character, Madame Septmoncel, is the focal character in this story. She teaches Nancy Burton, Walter Burton’s sister, not just academic subjects, but how to become the right kind of young woman.

“One Day in Spring” tells the story of Noel Townshend, who goes to New York to become an actress after graduating with a degree in chemistry. She receives a scholarship-apprenticeship at a professional theatre company, and like Selina, is on the brink of womanhood.

“Prelude to the First Night Alone” tells the story of Paul and Estelle’s broken relationship. The pair met in the theatre, and Estelle cheated on Paul with one of their mutual friends.

“Please Wear Your Rubbers” tells the story of Vicky and Nana, whose friendship is close to ending when Vicky decides she wants to be an actress like Nana.

“A Room in Baltimore” tells the story of two beautiful and successful young actresses, Angel and Fiona, who, despite their beauty, cannot find a place to stay for the night in Baltimore.

“Julio at the Party” focuses on the conflict between Julio, a beautiful Spanish poet, and Walter, a political Catholic who served in the military. At a party thrown for Julio, the two enter a serious conflict.

“The Foreign Agent” tells the story of Amy and her mother, Angel. When Angel’s literary agent, Roscoe, comes to the apartment, he and Amy begin a quiet flirtation, much to Angel’s chagrin and jealousy.

“The Moment of Tenderness,” the titular story of L’Engle’s collection, tells the story of Stella Purvis and Steve Carlton, two married people in the small town of Mt. George, Vermont, who fall in love despite their circumstances.

“The Foreigners,” also set in Mt. George, Vermont, tells the story of what happens in Mt. George when the Brechsteins come to town. The Brechsteins, who are unapologetically secular, urban, and outspoken, cause scandal almost every day.

“The Fact of the Matter” tells the story of old Mrs. Campell’s new allegiance to the Church of the Devil, an allegiance made only in reaction to the intolerably fake, sanctimonious Christians in her small town.

“Poor Little Saturday” tells the story of a young man who finds a witch woman living in a boarded-up plantation. Eventually, the witch is discovered and pulled from her abode by a mob of angry townspeople, but she escapes on a magical camel.

“That Which Is Left” tells the story of Martin, a successful artist who returns to his childhood home after his sister telegrams him. Upon discovering how seriously ill his parents are, how shabby his old home has become, and how ugly and religious his sister is, Martin leaves his old home, unable to participate in the love that lives in the ugliness.

“A Sign for a Sparrow” tells the story of Rob the cryptologist, who sets off on an intergalactic mission to translate the languages of aliens. Upon meeting the aliens who look like giant sparrows, Rob is asked to translate one of the oldest books they have—which happens to be the Bible.

More summaries and resources for teaching or studying The Moment of Tenderness.

The Moment of Tenderness from BookRags. (c)2022 BookRags, Inc. All rights reserved.