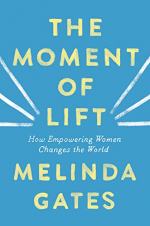 Melinda Gates
This Study Guide consists of approximately 54 pages of chapter summaries, quotes, character analysis, themes, and more - everything you need to sharpen your knowledge of The Moment of Lift.

The Moment of Lift Summary & Study Guide includes comprehensive information and analysis to help you understand the book. This study guide contains the following sections:

This detailed literature summary also contains Topics for Discussion on The Moment of Lift by Melinda Gates.

The following version of the book as used to create this study guide: Gates, Melinda. The Moment of Lift. Flatiron Books. 2019. First Edition. Hardcover.

The book begins with a short introduction by the author, Melinda Gates. She explains how her childhood influenced her dedication to female empowerment as well as her love of software. She tells the reader about her marriage to Bill Gates and her initial belief that women were expected to be at home with her children. Now, 22 years after the birth of her first child, Melinda considers herself a feminist that wishes to remove the barriers for women around the world.

Chapter One focuses on Melinda’s transition from a shy mother to a vocal advocate for female empowerment. By the time she married Bill, she had been working at Microsoft for about ten years. She helped him create the Bill and Melinda Gates Foundation to focus on their passion for philanthropy, but wanted to work behind the scenes as she valued her and her children’s privacy. Over time, Melinda realized that they needed to invest in making contraceptives easily accessible around the world. She says that family planning is life-saving and allows women to become successful and better care for the children that they choose to have. After a successful family planning summit in the U.K., Melinda decided to become a public advocate for family planning despite her close ties to the Catholic Church who fundamentally disagrees with these beliefs. Melinda tells the reader that she is going to focus on separate challenges women face around the world and how empowering them will improve the world.

Chapter Two starts with the basic challenges of women across the world; access to maternal and newborn care. In many third-world countries, doctors are not readily accessible. Midwives are often looked at with suspicion, and superstition and tradition halt progress. Therefore, those who wish to make changes must focus on two important things. The first is the lesson from Melinda’s mentor, Hans Rosling, who told Melinda to focus on those who are pushed to the edges of society and understand life through their eyes. The second is to create a good delivery system by understanding why people think the way they do and seeking change from within their culture rather than trying to pressure them with another’s. Humanity must look to include everyone, rather than exclude those who they are afraid of.

Chapter Three formally introduces the concept of contraceptives and family planning. Female empowerment begins with the decision to have kids, and when to have them. The most dis-empowered women are those who are unable to space their births and, in turn, cannot provide for their children which continues the cycle of poverty. However, changing the viewpoint on contraceptives is challenging all across the world. The Catholic Church is against family planning, often claiming that is immoral or increases the chances of sinful nature. Many other countries, including the United States until the twentieth century, use the lack of contraceptives to control women. But there are programs like Tupange in Kenya who push for the use of contraceptives and help men understand what their wives are going through by pushing for honest conversation. Family planning is the basis for female empowerment, and continues to face pushback from those who want to maintain their power.

From there, Melinda talks about education. When girls have access to an equal education, they improve the chances of future generations. Learning is power. It builds confidence. It teaches basic human rights and shows them that abuse and suffering are not the norm. There are successful programs that decrease the gender inequality by encouraging families to send their daughters to school instead of relying on them for work at home. This support encourages change.

However, unpaid work is a direct factor in hindering women’s progress. When they are expected to do all of the chores and caretaking, they do not have time for anything else. Many advocates push for advancements in both calculating and lowering unpaid work. Melinda believes the best chance for changing is improving equality in marriages. If husbands understand how much their wives work, most are willing to share the burden. And when the work is split, everyone is happier. This is the start of true equality.

That leads directly into Chapter Six where the greatest detriment to an equal marriage is introduced - child marriage. When girls are forced into marrying and having children as young as 10, all potential growth is lost. While many smaller communities believe child marriage is the best way to protect their daughters, there are successful missions in changing that viewpoint. In Senegal, the people were encouraged to discuss the issues amongst each other, and came to the conclusion that child marriage along with female cutting. They understood the future they were taking away from their daughters and were able to influence every other village to change their views. This willingness to change is what allows countries to thrive.

Chapter Seven shifts the focus back to empowering women by improving the quality of the work they have to do. This especially applies to agriculture. In many third-world countries, men make all of the decisions, but women do most of the work. Therefore, people must talk to women when looking to make improvements on the agricultural process. Melinda says that gender inequality comes from male-dominated cultures and religions, and many institutions must be reformed.

Then, Chapter Eight talks about challenges women face in the workplace. Specifically, the disparity within the software and technology industry. Only 15% of the workers within that group are women. A major factor in this is the established work culture. Men are often seen as more competitive and are praised for personal drive. Meanwhile, women are frequently ridiculed for pursuing personal goals or sharing emotions. Melinda says this is a symptom of gender bias. Both genders need to feel comfortable to voice their opinions and act like themselves at work. If one group is empowered, so is the other.

All of these sections culminate in the final section where Melinda emphasizes the need to accept people’s suffering without giving it back. First, she tells the story of the sex workers in India who are deprived of physical contact outside of their jobs. However, by working with these people, the foundation is able to build a system to protect the workers from violence as well as stop the HIV epidemic in their country. This proves the value of reaching out to those that society has excluded. Then, Melinda says that the strongest voices are those who are able to handle suffering and let it go instead of pushing it back onto the people who gave it to them. This is what she believes is humanity's ultimate goal. Turn equality into connections where everyone is included and given the chance to thrive.

More summaries and resources for teaching or studying The Moment of Lift.

The Moment of Lift from BookRags. (c)2022 BookRags, Inc. All rights reserved.