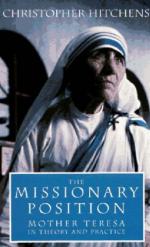 Christopher Hitchens
This Study Guide consists of approximately 25 pages of chapter summaries, quotes, character analysis, themes, and more - everything you need to sharpen your knowledge of The Missionary Position.

The Missionary Position: Mother Teresa in Theory and Practice Summary & Study Guide includes comprehensive information and analysis to help you understand the book. This study guide contains the following sections:

This detailed literature summary also contains Topics for Discussion and a Free Quiz on The Missionary Position: Mother Teresa in Theory and Practice by Christopher Hitchens.

The Missionary Position: Mother Teresa in Theory and Practice, by Christopher Hitchens, investigates the motives and actions of a Catholic nun who, for many, epitomizes love and charity throughout the world. Published in 1995, when Mother Teresa was in her mid-eighties and two years before her death, the book relies on research from articles, books, documentary film, still photography, unpublished manuscripts, personal contact, and eyewitness accounts to construct an argument that the nun's first allegiance is neither to helping the poor nor to spiritual matters, but to aiding the worldly ambitions of the Church. Hitchens, a well-known journalist and nonfiction book writer, has forged a career on playing the devil's advocate. He delights in taking unorthodox or surprising positions, and then defending them with eloquently reasoned arguments based on thorough research. In this book, he is stymied by the secrecy of the Catholic Church and the inaccessibility of its financial dealings, yet his attack on Mother Teresa is uninhibited. Hitchens, who later wrote an influential book that defends atheism, succeeds at least in making the reader wonder if there is more to Mother Teresa than meets the eye.

Mother Teresa has long been considered a candidate for canonization by the Church, which would officially make her a saint. In the book, Hitchens claims that this widespread belief in her saintliness, held by Catholics and many others, is a huge advantage to Mother Teresa in her efforts to enrich and empower the Church. He says it protects her from scrutiny by the media or, indeed, from any skepticism concerning the purity of her intentions. Hitchens doesn't make the case that Mother Teresa cares about sainthood, or that it was originally part of a plan. Rather, he believes that her increasing fame over the years also increases her ability to successfully solicit donations and to curry favor in places where the Church wants to strengthen its presence. The pope recognizes Mother Teresa's power and uses her for these fund-raising and political purposes, Hitchens contends. For her part, Mother Teresa claims to be a simple, humble nun doing the work of God, but Hitchens believes she isn't so naive. He cites several instances of her saying she knows little about politics and does not do the bidding of the rich and powerful, to which Hitchens responds that she frequently courts such people.

He shows her in the company of leaders of government and other organizations, many of whom have reputations for unethical and even despotic behavior. He makes connections between her praise of such people and the awards and money she receives from them. He shows how Mother Teresa is silent when the bad behavior of such people is exposed, and how she occasionally even publicly rises to their defense. Hitchens does not connect the millions of dollars Mother Teresa raises to any personal gain, but he charges her with helping to misapply much of it. Instead of improving the lot of the poor with the money, she lets the Church use it to enhance its own position in the world, the author claims. However, he is unable to provide solid evidence of how much money she raises, or of how it is used. He says these facts are kept a close secret by the Church. Instead, Hitchens builds a case that Mother Teresa's hostels do not adequately care for the sick and poor, especially given the huge donations she receives. Mother Teresa's rationale is that the suffering of the poor is good for the world, Hitchens writes. He makes no attempt to disguise his outrage over what he sees as her exploitation, cunning, and arrogance.

More summaries and resources for teaching or studying The Missionary Position: Mother Teresa in Theory and Practice.