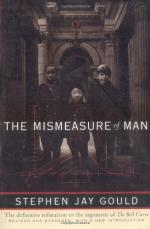 Stephen Jay Gould
This Study Guide consists of approximately 33 pages of chapter summaries, quotes, character analysis, themes, and more - everything you need to sharpen your knowledge of The Mismeasure of Man.

The Mismeasure of Man Summary & Study Guide includes comprehensive information and analysis to help you understand the book. This study guide contains the following sections:

This detailed literature summary also contains Topics for Discussion and a Free Quiz on The Mismeasure of Man by Stephen Jay Gould.

The Mismeasure of Man by Stephen Jay Gould is a book that is concerned with how to rank people into groups on the basis of intelligence in a manner that is meaningful. Since intelligence is an abstraction about the human brain, Gould feels that it is possible to rank humans on this basis. The author, a paleontologist with a statistical background, analyzes data within a historical context and combines his skill as a scientist with his concern as a historian when looking at the issue of biological determinism. He looks at what they did right and what they did wrong in measuring human intelligence. Certain groups are always ranked on the bottom, and this is used to justify the social ordering. Why spend money on them if it is innate is the way the argument goes. The work done in intelligence ranking became a tool of racial prejudice since it was used to suppress the disadvantaged groups and in come cases, to prevent their propagation.

Gould basically covers the history of the field of intelligence testing, looking at how it developed and what the various techniques are. He duplicates the work of some of these earlier scientists and disproves their results such as with Morton's skull measurements. The errors committed in measuring the skulls led to improper conclusions about brain size and intelligence and meant discrimination for various disadvantaged groups that were ranked at the bottom. Gould carefully considers the questions of bias on the part of the experimenter whose studies lead to biased pre-determined results. For example, it was considered that blacks were the inferior group. Data can be selected and used in such a way to prove that blacks are the inferior group. This is the kind of bias that Gould looked for in these intelligence studies since this kind of bias leads to faulty conclusions.

Gould presents a good history of the development of the field of intelligence testing. He looks at the rational behind the different theories and methods used by the early developers of the science. The theory of evolution influenced the way that all scientists viewed man and man's situation. In some cases, many of these early scientists went overboard erring on the side of biology and not giving enough weight to cultural factors. Gould shows how this issue is resolved over time and others repeat the work and debunk the theory, as Gould does.

Gould also looks at the development of different statistical techniques used in intelligence testing. He writes in depth on the statistical technique of factor analysis and how it tries to construct an intelligence measure. He looks at the dispute between Burt and Spearman as to who actually developed the technique. Many laymen will be lost in this chapter as it is rather technical. At the end of the book, there are other articles on subjects to do with statistics like the bell shaped curve, which every student of statistics knows represents a normal distribution.

Even though there are some areas that presuppose a rudimentary knowledge of statistics, the book is still informative regarding the development of the field of intelligence measurement.

More summaries and resources for teaching or studying The Mismeasure of Man.

The Mismeasure of Man from BookRags. (c)2022 BookRags, Inc. All rights reserved.