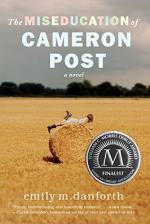 Emily M. Danforth
This Study Guide consists of approximately 45 pages of chapter summaries, quotes, character analysis, themes, and more - everything you need to sharpen your knowledge of The Miseducation of Cameron Post.

The Miseducation of Cameron Post Summary & Study Guide includes comprehensive information and analysis to help you understand the book. This study guide contains the following sections:

This detailed literature summary also contains Quotes and a Free Quiz on The Miseducation of Cameron Post by Emily M. Danforth .

The following version of this book was used to create this study guide: Danforth, Emily M. The Miseducation of Cameron Post. Balzer + Bray, 2012.

The Miseducation of Cameron Post began in the Summer of 1989 in Miles City, Montana when protagonist and narrator Cameron Post was 12 years old. Cameron had been shoplifting and kissing her friend Irene Klauson while her parents died in an accident at Quake Lake, which they visited every year. Cameron’s very religious Aunt Ruth moved in with Cameron and Grandma Post. Cameron began renting VHS movies and decorating her old dollhouse to cope with her grief. She stopped spending time with Irene. Irene’s family discovered a fossil on their property, which resulted in great success and wealth for them. Irene went away to a boarding school. On Aunt Ruth’s request, Cameron began attending a new church called Gates of Praise and their youth group, Firepower.

During the summer before starting high school, Cameron became close friends with Lindsey Lloyd, who joined the swim team with her while she stayed with her father in Miles City for the summer. Lindsey was a lesbian and told Cameron about her experiences with gay pride in Seattle, where she lived during the rest of the year with her mother. Cameron and Lindsey pursued a casual relationship, which mostly consisted of kissing. They stayed in touch after Lindsey returned to Seattle at the end of the summer. Ruth began dating Ray, who sold frozen goods around the local area.

Cameron became friends with Coley Taylor, who was in her biology class and started driving her to Firepower meetings at Gates of Praise. Cameron developed a crush on Coley, despite the fact that Coley had a boyfriend, Brett. Coley convinced Cameron to join her and Brett at prom. Cameron invited her best friend Jamie to prom. On prom night, Jamie realized that Cameron was attracted to Coley. He thought Cameron was confused and kissed her. Cameron and Jamie began casually dating after that, but Cameron was never very interested in doing anything beyond kissing him.

Cameron and Jamie argued and broke up at Miles City’s annual Bucking House Sale. Jamie hooked up with another girl. Cameron went home with Coley and they kissed, which led Coley to feel very confused. Over the following summer, Cameron and Coley both got summer jobs and Brett went away for soccer camp. Cameron and Coley began going to the movies after work to kiss in the dark. Meanwhile, Ruth and Ray got engaged. Cameron learned that one of the lifeguards with whom she worked had dated a girl before. Reverend Rick Roneous, the leader of a new full-time school that treated gay people called God’s Promise, visited Gates of Praise and a Firepower meeting, which made Cameron and Coley feel uncomfortable.

Coley got her own apartment in Miles City. Cameron brought a movie to watch with Coley alone in her apartment, which featured lesbian vampires. Cameron and Coley drank alcohol and began kissing during the movie, escalating to pleasuring each other in Coley’s bed. However, Coley’s brother Ty and his friends interrupted them and Cameron left short after. Cameron felt upset after work that day when Coley did not visit her and decided to make out with her coworker. When Cameron returned home, Ruth had invited the pastor to the house and announced that Coley had revealed what they had done together. Ruth would be sending Cameron to God’s Promise.

At God’s Promise, Cameron met her new friends Jane and Adam and her roommate Erin. She had one-on-one meetings with Reverend Rick and Lydia March. Cameron grew closer to Jane and Adam because they would sneak away together to smoke the pot that Jane had grown. Eventually, Rick felt that Cameron earned the privilege to decorate her room and receive her mail. Cameron got a letter from Coley that expressed her shame at what had happened between them, which upset Cameron.

Cameron returned home for Christmas. She attended Ruth and Ray’s wedding, but refused to be Ruth’s maid of honor. She did not get to confront Coley before she left. Back at Promise, Mark Turner, a boy in Cameron’s group sessions, had a breakdown during a session when speaking about his father would not accept him. Overnight, Mark severely injured himself by using a razor to cut his genitals and pouring bleach over the wounds. Rick brought Mark to the hospital. Rick would not admit that this was a suicide attempt. Cameron tried to convince the officers that came to investigate that the entire mission of the school was to make the students hate themselves. Cameron, Jane, and Adam planned to leave Promise. After finals, the three of them took a hiking trip but kept going until they reached Quake Lake and Cameron found closure with her parents.

More summaries and resources for teaching or studying The Miseducation of Cameron Post.

The Miseducation of Cameron Post from BookRags. (c)2022 BookRags, Inc. All rights reserved.