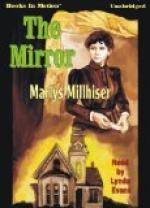 Marlys Millhiser
This Study Guide consists of approximately 41 pages of chapter summaries, quotes, character analysis, themes, and more - everything you need to sharpen your knowledge of The Mirror.

In Chapter One, Brandy and Elton formulate a plan to save her from marrying Mr. Strock. She wants to attend school, but John McCabe insists that she marry. She plans to run away to Aunt Harriet Euler, but instead the mirror transports her into Shay's body.

In Chapter Two, Brandy is in a future version of the Gingerbread House. She realizes she is in a different body whose name is Shay. The mirror has a large crack on the top. Brandy learns Shay has a wedding the next day also, and is shocked when Marek Weir kisses her and touches her thigh in front of everyone in the room.

In Chapter Three, Brandy is shocked by Shay's clothes and by Marek's behavior toward her. She is terrified when she accidentally turns on the boom box and Rachael...

More summaries and resources for teaching or studying The Mirror.

The Mirror from Gale. ©2005-2006 Thomson Gale, a part of the Thomson Corporation. All rights reserved.