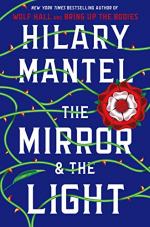 The Mirror & the Light Characters

Hilary Mantel
This Study Guide consists of approximately 57 pages of chapter summaries, quotes, character analysis, themes, and more - everything you need to sharpen your knowledge of The Mirror & the Light.

A blacksmith’s son who rises to become one of the most powerful men in England, Cromwell is an anomaly, and the harbinger of a whole new age—one in which how you were born will come to mean less than what you can do. In Mantel's portrayal, he is one of the first modern men.

Cromwell is a complex man. Witty, shrewd, and calculating, the king’s chief fixer, he nevertheless has his own peculiar code of ethics. His brutal upbringing has made him a tender father, and his vows to protect other people’s children often put him in difficult situations. His loyalty to the now-dead Cardinal Wolsey—himself a father figure to Cromwell—similarly disarms him; the thought that Wolsey might have died believing Cromwell betrayed him is the only thing that can make Cromwell cry.

Cromwell’s loyalty to Henry—initially built on...

More summaries and resources for teaching or studying The Mirror & the Light.

The Mirror & the Light from BookRags. (c)2022 BookRags, Inc. All rights reserved.