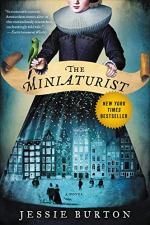 Jessie Burton
This Study Guide consists of approximately 59 pages of chapter summaries, quotes, character analysis, themes, and more - everything you need to sharpen your knowledge of The Miniaturist.

The Miniaturist Summary & Study Guide includes comprehensive information and analysis to help you understand the book. This study guide contains the following sections:

This detailed literature summary also contains Quotes and a Free Quiz on The Miniaturist by Jessie Burton.

The following version of this book was used to create this study guide: Burton, Jessie. The Miniaturist. HarperCollins Publishers, 2015. First Paperback Edition.

The Miniaturist is narrated by a third-person narrator who has insight only into Nella’s thoughts and feelings. The novel begins with a Prologue that takes place at the end of the novel’s timeline. In the prologue, unnamed characters are attending a funeral.

In Part One, 18-year-old Nella Oortman arrives in Amsterdam. She has been wed to Johannes Brandt in her hometown of Assendelft, and has come to live with him as his wife. Johannes is a wealthy merchant and member of the Dutch East India Company, and Nella is overwhelmed by the splendor of his house. Upon arrival, Nella is greeted by Marin Brandt, Johannes’s sister, and Cornelia and Otto, the home’s servants. Marin shows Nella to her room and has Nella’s pet parakeet, Peebo, sent to live in the kitchen. Marin, while not overtly hostile to Nella, has a cold and aloof attitude that makes Nella feel unwelcome in her new home. When Nella finally sees Johannes, at breakfast, he is not particularly forthcoming. Instead, he spends most of the conversation bickering with Marin about finances. Eventually, though, Johannes presents Nella with her wedding gift: a lavishly ornamented cabinet that contains an exact replica of the house.

One evening, Nella goes into Marin’s room and finds a large collection of artifacts from around the world, as well as love notes from an unidentified sender. Marin gives Nella a book called Smit’s List and through the directory of merchants, Nella is able to locate a miniaturist who can craft items for her cabinet and brings a letter with her requests to the miniaturist’s workshop on the Kalverstraat, a business street. Also in this area is a bakery, where Cornelia’s old friend Hanna works. When Nella receives her first delivery from the miniaturist, it contains a cryptic message, as well as items that Nella did not request, but that are identical to items in the house, signalling there is something strange about the miniaturist.

Nella attends a party with Johannes, and meets Frans and Agnes Meerman, old friends and current business associates of the Brandts. Johannes is currently working with them in order to sell a bulk of sugar that Agnes inherited. Upon returning home from the party, Nella attempts to consummate her marriage, and Johannes angrily rejects her. Despite this, Nella continues her pursuit of being the perfect wife. One day, she decides to visit him at his office, where she finds him conducting an affair with Jack Philips.

In Part Two, Marin tells Nella that she has known about Johannes’s homosexuality for a long time, and that it is part of who he is. Nella slowly comes to accept this, though she is saddened she will not be a traditional wife. One day, Peebo escapes through an open window. In a private conversation with Nella, Cornelia reveals that Frans is likely the source of the love notes in Marin’s room, as he has been in love with her for a long time. Many years ago, Cornelia says, Frans asked Johannes for Marin’s hand in marriage, and Johannes denied him, creating the tension that exists between the families.

The miniaturist sends Nella a set of dolls representing the Brandt household, the Meerman household, and Jack. With her newfound knowledge of Johannes, Nella asserts her freedom and her role as the mistress of the household over Marin. Johannes heads to Venice, where he plans to try and sell the Meerman’s sugar once and for all. One evening, Nella spies on Marin and finds her taking a bath, eating candied walnuts, and eventually crying while reading a love note.

During the time Johannes is in Venice, it is evident that the Amsterdam economy is starting to worsen. Nella sees Agnes at church, and Agnes says that Johannes has not taken any of her sugar with him on his trip. When Nella returns home, Jack is there and violently demands to know where Johannes is. Jack kills one of Johannes’s dogs, Rezeki. Otto and Jack begin to physically fight, and the fight ends when Otto stabs Jack in the shoulder. The wound is not severe, though, and Jack is able to escape.

In Part Three, the group must deal with the aftermath of Jack’s visit. When Nella goes to confront the miniaturist at her shop, another merchant informs Nella that the miniaturist’s residence has been vacant for some time. When Johannes returns from Venice, he greets Nella warmly. When Marin confronts him about how much sugar he sold while abroad, an explosive fight ensues that ends with Marin angrily telling Johannes of Rezeki’s death.

Soon, the sugar becomes more important than ever. Nella notices that the sugar loaf held by her Agnes miniature has blackened. Otto flees, concerned Jack may report their fight to the authorities. Frans arrives at the house to inform Nella and Marin that he has witnessed Johannes with another man, and will be reporting what he saw to the burgomasters. Despite these heightening stakes, Nella and Johannes continue to grow closer and reckon that though their marriage may not be romantic, it can still be fulfilling in the form of friendship.

Johannes is forced to flee, though, due to Frans’s accusations. The St. George Militia comes to the house in search of him. Though Nella attempts to deter their search, a messenger arrives announcing his capture. Soon after, Nella discovers that Marin is pregnant with an unwanted child. In subsequent chapters, Marin reveals to Nella that she always frowned upon the idea of becoming a wife and mother, as she longed to preserve her individual freedom. This signals a shift in Nella’s own thinking about separating what it means to be a woman and a wife.

In Part Four, Nella balances Marin’s pregnancy with Johannes’s legal predicament. She works with the bakers Hanna and Arnoud to sell some of the sugar. Despite Johannes’s doubts, Nella hopes the profits will be enough to buy off Johannes’s conviction. However, as Johannes’s trial begins, it becomes clear that there is an overwhelming bias against him, and that Frans is working with Jack to testify against Johannes. One day, Marin gives birth to a baby girl and names her Thea. Marin is insistent that they do not call a midwife, and so Nella and Cornelia assist with the birth, though they have no experience.

Despite Johannes’s convincing testaments, the court eventually rules against him and he is sentenced to death. Meanwhile, Nella finally enters the miniaturist’s workshop to find it has been abandoned. There, she meets Lucas Windelbreke, a clockmaker and the miniaturst’s father. Nella realizes how important the miniaturist has become to her over the past months, and how she has allowed Nella to become self-actualized. When Nella returns home, Cornelia informs her that Marin has died. Upon closer inspection of the child, they realize Thea is actually Otto’s daughter, not Frans’s as they previously thought.

Nella destroys her cabinet and uses its remnants as firewood. Nella discusses the terms of Marin’s burial with pastor Pellicorne. Though he is initially hesitant to bury her in the church because of her affiliation with Johannes, Nella eventually convinces him. After a final meeting with Johannes at the Stadhuis prison, he is executed by drowning the next morning. When the execution is over, Nella sees Otto in the crowd.

In Part Five, Nella brings Otto back to the house, where he meets his daughter. Otto says he knew about Marin’s pregnancy and returned in order to meet the newborn child. Though everyone is still reeling from Marin’s recent death and Johannes’s execution, the novel ends on a hopeful note. Nella looks out upon Amsterdam and feels a sense of control and purpose for her future.

The Miniaturist from BookRags. (c)2022 BookRags, Inc. All rights reserved.