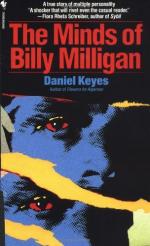 Daniel Keyes
This Study Guide consists of approximately 27 pages of chapter summaries, quotes, character analysis, themes, and more - everything you need to sharpen your knowledge of The Minds of Billy Milligan.

The Minds of Billy Milligan Summary & Study Guide includes comprehensive information and analysis to help you understand the book. This study guide contains the following sections:

This detailed literature summary also contains Topics for Discussion on The Minds of Billy Milligan by Daniel Keyes.

On October 11, 1977, Chief John Kleberg of the Ohio State University police department has increased patrols and issued alerts on campus after two women were attacked, raped, and robbed. The attacker has been dubbed the "campus rapist" by the media. The two victims, Carrie Dryer and Donna West, are both in medical training. When a third victim, Polly Newton, is attacked, police step up the investigation and West chooses William Milligan from mug shots. He is arrested and subsequently charged with the rapes and robberies of the two women. His attorney, Judy Stevenson, insists on a mental evaluation and Dorothy Turner agrees to talk to Billy. She soon discovers that the person she is talking to is Danny, one of Billy's personalities and that there are several others. After only a brief time, she is convinced he's telling the truth and begins pleading with the personalities she'd met up to that point for permission to share the news with Judy.

Judy is quickly convinced as well and begins working on an insanity plea along with trying to arrange for the best possible treatment program. The various personalities take "the spot" or spotlight, with Billy now acting as a completely different person. As Billy begins treatment, he becomes "fused" with most of the personalities and tells his story. His father committed suicide when Billy was a toddler. His mother eventually married a man named Chalmers who physically and mentally abused Billy. Billy had already known imaginary playmates but then he split fully. He lost great blocks of time and Danny was created to handle the episodes that involved pain. Arthur, an English gentleman with a high IQ, becomes the leader who helps keep the chaos to a minimum, though he never has full control. Ragen becomes the keeper of the rage, powerful and able to defend the body whenever threats appeared. Baby Christene, only three years old, was the younger sister of Christopher and was the child who could play with Billy's younger sister, Kathy.

Over the years, some of the personalities create problems, deal with and take drugs, and commit robberies and other crimes. Once, Billy plans to kill himself and Ragen takes over. Arthur and Ragen come to the conclusion that Billy is a danger to himself and they put him to sleep. Eventually, Ragen plans to rob a college student in order to pay some bills, but Adalana, a lesbian who craves physical attention, takes over the role and the woman declares that she's been raped. Arthur takes the spot and pays some bills. Ragen returns to find the money gone and fearing the bills haven't been paid, robs again. By the third time, Billy is captured and charged, though he later says his arrest was a rescue because it put him in touch with those who could help him. The legal battle rages on for years with media attention and public opinion forcing courts and doctors to take steps that were not in Billy's best interest. After fighting the system for months, the writer working with Billy on a book of his story receives a letter, indicating that Billy has again gone to sleep.

The writer offers up an epilogue and afterword, explaining that Billy eventually returns to the care of a psychiatrist who has experience with multiple personality disorder.

More summaries and resources for teaching or studying The Minds of Billy Milligan.

The Minds of Billy Milligan from BookRags. (c)2022 BookRags, Inc. All rights reserved.