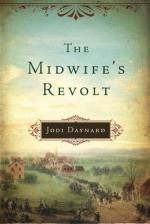 Related Topics
Our Own Country: A Novel
A More Perfect Union

Jodi Daynard
This Study Guide consists of approximately 59 pages of chapter summaries, quotes, character analysis, themes, and more - everything you need to sharpen your knowledge of The Midwife's Revolt.

This detailed literature summary also contains Quotes and a Free Quiz on The Midwife's Revolt by Jodi Daynard.

Elizabeth Boylston is a young wife when she and her husband, Jeb, set up house at a farm a few hours from Cambridge. She is happy with her life until Jeb sets out to join the Revolutionary War. When the first battle rages, Elizabeth goes to Cambridge and finds Jeb's body. Her in-laws want Elizabeth to join them as they flee the area, but Elizabeth has become happy on her farm. She refuses to leave. She returns home and begins to work through her grief with the help of her neighbors and close friends, Abigail and John Adams.

Elizabeth is a midwife. She has studied healing most of her life, but the people of the area are skeptical and mistrustful until one night when a woman in distress sends a servant to Elizabeth. She helps the woman give birth to a healthy child, and the news spreads. Soon, Elizabeth is in demand. She continues to work on her farm with the help of one indifferent man until the day Abigail arrives for a visit to find that Elizabeth is very ill. Abigail remains to help, but she also makes it clear that Elizabeth must have help to maintain all the chores on the large farm.

A short time later, Martha Miller arrives. From the beginning, Elizabeth believes that Martha and her brother Thomas are Tories – sympathetic to the English cause in the war. Elizabeth begins to teach Martha about midwifery and healing, while keeping in mind that Martha and Thomas might be treated as a traitor if America wins the war.

Elizabeth wants to do something to help the American cause. On several occasions, she dresses as a boy in order to eavesdrop at some area taverns. Sometimes, she dresses in her best to visit another social gathering place. Through it all, she continues to teach Martha and to tend the ladies of the area who are giving birth and she offers comfort to anyone who is sick.

After one of her forays, Elizabeth learns that a stranger who recently arrived in the area has died. She examines the body, but she does not realize that he was poisoned until another stranger dies in similar circumstances. At that point, Elizabeth knows that someone used belladonna to kill the two men. It is not until later that she learns that Martha, who is not a Tory at all, is gathering information and carrying out missions for the Americans.

Meanwhile, Elizabeth's sister-in-law, Eliza, arrives to stay with Elizabeth while she gives birth. Eliza is unwed, which creates a scandal in this time period, but she is also in love with a black slave who is the father of her son. Eliza forms a strong bond with Elizabeth and Martha, and refuses offers to return to her life of relative luxury in order to remain with the people she considers true friends.

The situation comes to a climax when Elizabeth's brother, Harry Lee, returns for the first time after years at sea where he is also working for the American cause. Harry, Thomas, and some other American officers know that John Adams will soon be returning from an extended stay in France and that the Tories are planning an attack. The Americans save John Adam's life and put an end to the plot.

When Elizabeth knows for certain that Thomas is not a traitor to America's cause, she feels free to follow her heart to love him. Martha and Harry, who have been attracted to each other from their first meeting, marry as well. The details of Eliza's life are presented in another novel of the series.

More summaries and resources for teaching or studying The Midwife's Revolt.