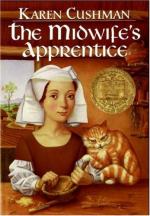 Karen Cushman
This Study Guide consists of approximately 40 pages of chapter summaries, quotes, character analysis, themes, and more - everything you need to sharpen your knowledge of The Midwife's Apprentice.

This detailed literature summary also contains Topics for Discussion and a Free Quiz on The Midwife's Apprentice by Karen Cushman.

The Midwife's Apprentice by Karen Cushman is a coming of age tale that tells the story of Alyce, a young girl in her teens during the middle ages.

The novel begins with a young girl, known only as Brat, sleeping in a dung heap. Awakened by teasing boys, Brat meets the midwife who sends her on her way. Brat is able to convince the midwife, Jane, to allow her to work for food, an arrangement that continues until Brat, now known as Beetle to Jane, becomes the midwife's apprentice.

Beetle works hard for the midwife, gradually learning the 'magic' that Jane does when assisting in the births of the village women. Though Jane sometimes treats the girl harshly, Beetle knows no other way and does not really think that she deserves much more out of life. In addition, since Beetle has lived on her own for so many years, she has no ability to dream or desire more for herself. Without realizing it, Beetle begins to learn how to be a midwife and it isn't long before she is called on to assist first one mother, then another. The results are mixed, but when Beetle helps one mother when Jane cannot, the girl begins to develop a reputation for herself.

Beetle's life changes rapidly while she is living with Jane and she learns more about herself as well. Formerly very timid, Beetle begins to have a bit of faith in herself and develops a sense of identity along the way. The girl begins to stand up for herself, shyly at first, but then a bit more forcefully. Beetle stands up to the boys that tease her, and even stands up to Jane, though she knows that her life will be a bit harder. To a young girl who is just beginning to find her way in life, the small victories are worth the battles she faces.

Jane sprains her ankle and Beetle has to take the midwife's place at the fair in order to purchase supplies. While at the fair, Beetle is told she is pretty and given a comb by one of the merchants. The comb as well as the gift of the compliment are enlightening to the girl, who begins to see that she might be worth more than she has always believed. As she leaves the fair, a man mistakes her for someone named Alyce, a girl who can read. Beetle wonders at the fact that someone might believe her able to read and decides that she should have a name of her own. From this point on Beetle takes the name Alyce.

In the village Alyce tries hard to convince others to call her by her chosen name and continues to struggle to find her identity. While being teased by the boys of the village, Alyce finds herself in a position to help one, a red-head named Will. Alyce does, even though she is frightened, and earns the friendship and respect of the boy. Alyce continues to grow emotionally while she learns more about being a midwife and about herself.

Alyce is requested at the side of a mother in labor, but the woman is unable to have the baby no matter what Alyce does. Jane arrives and easily assists the mother while Alyce watches. The girl quickly loses whatever faith she has developed in herself and runs away from the village, taking a position at an inn.

Alyce works at the inn, pleasing the owners Jennet and John Dark, but she is not happy. Feeling like a failure, Alyce goes through the motions of work and takes an interest in Magister Reese, a scholar who is staying at the inn. Amazed that the man can read and write, Alyce watches him from a distance, afraid to get closer. Reese, sensing the girl's interest and shyness, begins teaching her cat about reading and writing and before long Alyce has learned the skills.

Jane visits the inn looking for Alyce and the girl is shocked to hear that she is not the failure she believed herself to be, but had disappointed Jane because she gave up. On a stormy night, a couple arrives at the inn and Alyce, though very frightened of failing, helps the woman give birth to a son. Afterward the girl receives many offers of employment but decides that what she really wants is to be the midwife's apprentice. Returning to the village, Alyce is turned away at the cottage of the midwife but after some thought realizes that Jane is testing her. Alyce returns to the door and tells Jane that she has learned not to give up and will not leave when faced with failure. Jane admits the girl to the cottage and Alyce begins her life again, as the midwife's apprentice.

More summaries and resources for teaching or studying The Midwife's Apprentice.