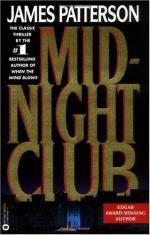 James Patterson
This Study Guide consists of approximately 43 pages of chapter summaries, quotes, character analysis, themes, and more - everything you need to sharpen your knowledge of The Midnight Club.

This detailed literature summary also contains Topics for Discussion and a Free Quiz on The Midnight Club by James Patterson.

The Midnight Club is a novel of mystery, murder, and romance mixed together in the unique style that readers have come to expect of James Patterson. John "Stef" Stefanovitch has been restricted to a wheelchair since being shot by his nemesis, the Grave Dancer. Stef does not let this situation stop him, though, returning to work as soon as he can convince his bosses that he can do the work better than before. Soon afterward Stef is called to the location of a shooting where he discovers that the Grave Dancer has been murdered. All is not what it seems, however, and Stef quickly finds himself embroiled in an investigation that is far more dangerous than he could ever have imagined. The Midnight Club is Patterson at his best.

It takes Stef a long time to recover, but when he does he quickly returns to the police force. Stef is determined to get the Grave Dancer. However, someone gets the Grave Dancer before him. Stef is called in to investigate the murder of Alexandre St.-Germain at a local bordello. Stef learns of some tapes hidden in the bordello that are recorded evidence of the activities that have taken place in the house. Stef takes all the tapes, hoping to find one that will show the murder or suggest who the killers might have been.

At the same time, Sarah McGinniss, a writer, has been given full access to anything that might include information on a group of organized crime bosses called the Midnight Club, the subject of her next book. When Alexandre St.-Germain is killed, Sarah immediately asks for access to the investigation since he was a pivotal part of her book. At first Stef resents the intrusion since he normally likes to work alone, but he soon finds Sarah's involvement to be helpful due to the wealth of information she has gathered on the Midnight Club. Stef and Sarah begin to review the tapes together, as well as combing through her information, soon spending a great deal of time together.

One of the tapes shows a convicted killer discussing the Midnight Club. Stef jumps on this information and calls the prison to visit the man. The man will only see Sarah, who has visited him many times in the past. The man, Nicky Wilson, will not talk about the Midnight Club. The visit ends before it has begun. However, Nicky arranges to visit with Sarah again a few days later. Sarah learns on this visit that the Midnight Club is arranging a meeting of its members in Atlantic City. Stef takes this information and arranges a large police operation that includes members of the FBI as well as other law enforcement agencies. During their surveillance of the Midnight Club, someone gets into their hotel suite and murders most of the members.

During this time, a police officer by the name of Isiah Parker has been working with a rogue group of cops murdering crime figures who cannot be stopped through the courts. Isiah participates with this group because he believes he is getting justice for his brother, Marcus, a promising boxer who was found dead of a drug overdose in a motel. Isiah believes the mob, and specifically Alexandre St.-Germain, killed Marcus in retaliation for his failure to throw boxing matches. Isiah is in Atlantic City when the Midnight Club murders take place, expecting to be given orders to assassinate some unknown figure. Instead, Isiah finds himself the target of one of his own partners.

Isiah goes to Stef. Along with Sarah, Stef and Isiah organize a group of trusted law enforcement officers to begin a campaign of harassment against Alexandre St.-Germain. This campaign appears to be working until Sarah's son is snatched off the street. A few days later, three gunman break into Sarah's house and try to kill her and Stef while they sleep. Stef manages to kill two of the gunmen in the apartment and follows the other out into the street. Stef gives chase and kills the other man seconds before he is hit by a car. Stef's injuries are severe, but the operations to fix these injuries also help to repair Stef's prior injury. Several months later, Stef is able to walk.

More summaries and resources for teaching or studying The Midnight Club.