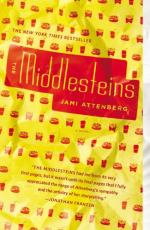 Jami Attenberg
This Study Guide consists of approximately 51 pages of chapter summaries, quotes, character analysis, themes, and more - everything you need to sharpen your knowledge of The Middlesteins.

The Middlesteins Summary & Study Guide includes comprehensive information and analysis to help you understand the book. This study guide contains the following sections:

This detailed literature summary also contains Quotes and a Free Quiz on The Middlesteins by Jami Attenberg.

Richard and Edie Middlestien are a typical Midwestern family and have been for more than thirty years. They live in the Chicago suburbs, have two children, earn their living from respectable professions, and have good, solid friends.

But Edie is obese and has life threatening diabetes. She weighs more than 300 pounds and is about to undergo a second surgery to put a stent in her leg. Her other leg already has one. The doctors have warned that the next surgery may be for a bypass if she doesn't lose weight.

Edie's weight has already forced her into early retirement, not due to health or performance issues, but because of her appearance, and right before her second surgery, Richard leaves her.

Edie's daughter, Robin, who has tried to keep her distance since she left home, decides that she needs to be there for her mother now that her father has left. She starts spending more time with Edie and at the same time starts dating her longtime friend, Daniel. She rejects her father for his actions.

Rachelle, Edie's daughter-in-law, is in the middle of planning her children's b'nai mitzvah when the crises occurs. But she decides to launch a plan including the entire family to restore Edie's health. Her plan includes Robin and her daughter Emily walking with Edie around the track for exercise and finding experts who can help Edie lose weight and overcome her food addiction. In the process, she turns against junk food and enforces vegetables on everyone including the members of her book club.

At first her husband, Edie's son Benny, tries to remain neutral, but comes to realize that his mother raised him with love and he respects her, but he can't respect his father and his choice to leave his mother when she's sick. He also starts losing his hair and confronts his wife about their diet. At the same time, their daughter, Emily, tires to escape through the window and falls and breaks her arm.

As all of this is happening, both Edie and Richard meet new companions. Edie's is a Chinese man whose restaurant she helps save. Richard meets a British woman.

The b'nai mitzvah takes place and later that evening, Kenneth, Edie's e new boyfriend, finds her dead in the kitchen. She's buried, but Richard, even though he's invited to the funeral and the gathering afterwards, is treated like a guest. While the second generation of adults and their partners bond at the gathering. Richard remains in exile, but reaches out to his granddaughter Emily and bonds with her.

More summaries and resources for teaching or studying The Middlesteins.

The Middlesteins from BookRags. (c)2022 BookRags, Inc. All rights reserved.