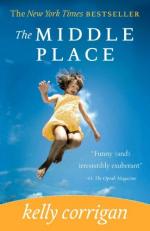 This detailed literature summary also contains Topics for Discussion and a Free Quiz on The Middle Place by Kelly Corrigan.

Kelly Corrigan is a young wife and mother who finds a suspicious lump in her breast one afternoon. Kelly is smart enough to know that the size and hardness of the mass is not a good sign. She maintains her cool as she tends to her three-year-old daughter, Georgia, and one-year-old daughter, Claire. She calls her husband Edward, who is out of town on business, to tell him about her discovery. He feels positive that the mass is probably benign given Kelly's young age and her seemingly good health. One of Kelly's good friends and neighbors is a physician. She rushes over to her friend's house and just as she feared, the doctor confirms that the rigidness of the mass is a matter of concern.

Kelly is very close to her parents, especially her father, George. She decides not to tell them about her lump because she does not want to alarm them. They are so far away in their home in Philadelphia where she grew up; they would feel helpless and would worry unnecessarily. A few days after discovering the lump, Kelly has a mammogram. The physician at the clinic tells her that the size and shape of the lump—it has tentacles—is indeed, very suspect. When Edward learns of the doctor's concern, he flies home immediately so that he's with his wife during the biopsy. The biopsy is positive and the lump is cancerous.

Kelly has no recourse but to tell her parents. They are naturally upset. George, who is an extremely upbeat person, gives his daughter a pep talk and assures her everything will be fine. Mary, who is a little more down to earth, shows her concern and worry. But both her parents, in their own ways, are fully supportive of her. Kelly begins treatment with four brutal chemotherapy sessions that have vicious side-effects that range from nausea to fatigue and wear on her nerves and cause stress in the family. She eventually loses her hair but makes lemonade out of lemons by having a friend shave her head in front of the girls in a party-like atmosphere.

But Kelly gets through her chemo and then goes onto the next step in her cancer ordeal. She has to undergo a lumpectomy and another biopsy to make sure there are no signs of cancer in the lump or in the surrounding lymph nodes. She is cancer-free but shortly after gets the horrifying news that her beloved father had blood in his urine, is checked out, and diagnosed with bladder cancer. It is frightening news, but the irony that both Kelly and her father, who shared the closest relationship in the family, going through cancer treatment at the same time was not missed. Kelly was militant in demanding that George get the proper treatment.

Kelly is one mass of worries during this period of her life. She worries about herself, her kids, and husband being without her, her father's disease and the potential of her mother being without her father. But Kelly makes it through and after radiation is done, she is cancer-free. Her father does well with his treatment and his disease seems to disappear. Kelly wasn't sure if it was the prayers of his family and friends that cured him or if it was her unwavering insistence that he get the right treatment.