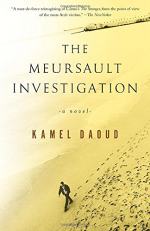 Kamel Daoud
This Study Guide consists of approximately 52 pages of chapter summaries, quotes, character analysis, themes, and more - everything you need to sharpen your knowledge of The Meursault Investigation.

This detailed literature summary also contains Quotes and a Free Quiz on The Meursault Investigation by Kamel Daoud.

The following version of the novel was used to create this study guide: Daoud, Kamel. The Meursault Investigation. Other Press, June 2, 2015. Kindle.

God, religion, faith and murder all mix in The Meursault Investigation by Kamel Daoud, a novel about belief and identity. Harun Uld el-Assas has felt like he has lived in his older brother’s place ever since his brother’s murder when Harun was only seven. All of his life he can remember accompanying his mother on her quests to search out information about her son’s death and his killer. Because there was no body found and she has no proof he was the Arab killed on the beach, no one takes her seriously. She is even denied the pension due her because her son was killed by a Frenchman. In this novel, Harun seeks to give his brother a name and a past. He also discusses his opinion of religion, his inappropriate relationship with his mother and criticizes a book written about his brother’s murder.

Harun narrates the story of his brother’s murder set in the time period of the War of Liberation in Algeria. Because his brother was killed by a Frenchman, Musa would have qualified as a martyr if he had ever been positively identified as the murder victim. Instead, Musa’s body was washed away by the waves from the beach on which he was shot leaving his family without even a body to bury. Because his mother was overwhelmed by grief from Musa’s sudden death, Harun felt as if died as an individual and was forced to live as a reincarnation of his brother.

With no on to tell his story to for years, Harun is relieved when the young graduate student to whom he relates his story comes to him seeking information for a thesis paper. The two meet in a bar on several occasions for Harun to tell the man what he knows about his brother and his brother’s murder, which turns out to be very little. Harun tells the student his purpose in telling the story is to give his brother a name. His determination to give his brother an identity comes not only from the two newspaper articles written at the time of his death, neither of which identifies Musa, as well as a novel written by Musa’s murderer in which the author never includes Musa’s name.

About midway through his story, Harun surprises his companion by sharing with him a secret. Shortly after Independence was announced in Algiers, Harun shot and killed a Frenchman who was on the property where Harun and his mother were living. Harun was taken in by soldiers and questioned, but he was not questioned about the murder. Instead, he was interrogated as to why he had never joined the fighting for the resistance. Harun felt cheated when he was set free with no punishment for the murder he had committed.

In the final chapter, Harun draws an unsettling parallel between the story of his brother and the story of God. While people everywhere were willing to pray and sacrifice to a God they had never met and had no proof existed, they were unwilling to believe Harun’s story about his brother because he had no firm evidence. When the unnamed student asks Harun if he believes in God, Harun turns the question back on the student asking if he believes the story he has just told him.

More summaries and resources for teaching or studying The Meursault Investigation.