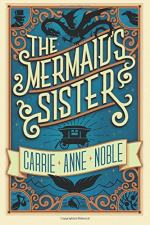 Carrie Anne Noble
This Study Guide consists of approximately 36 pages of chapter summaries, quotes, character analysis, themes, and more - everything you need to sharpen your knowledge of The Mermaid's Sister.

This detailed literature summary also contains Quotes and a Free Quiz on The Mermaid's Sister by Carrie Anne Noble.

“The Mermaid’s Sister” is a young adult historical fantasy novel by Carrie Ann Noble which follows the efforts of Clara and O’Neill’s efforts to get Clara’s sister Maren, a mermaid, to the ocean before she dies. When the novel begins, Clara and Maren, both 16, live on Llanfair Mountain in Pennsylvania with their guardian, Auntie Verity, and their pet dragon, Osbert, in the year 1870. Auntie says that a stork delivered Clara to her, while a clam delivered Maren to her when both girls were just babies. The girls at first believe that Auntie’s stories are just stories, but when Maren begins turning into a mermaid, both girls are stunned. Maren looks forward to life as a mermaid, while Clara cannot imagine life without Maren.

Scarff and O’Neill, two traveling merchants, visit the mountain. Scarff is Auntie’s longtime boyfriend, while O’Neill is his adoptive son. O’Neill was found in a churchyard cemetery under an apple tree by a priest, after which time Scarff thought to bring the baby to Auntie to raise. It was only then that Scarff decided to raise the baby himself. Years later, O’Neill has become Scarff’s business assistant. Their visits to the mountain are relished by Auntie, but especially by Clara and Maren. Clara is secretly in love with O’Neill, while Maren is outwardly in love with O’Neill. From all appearances, O’Neill seems to favor Maren which makes Clara jealous. Nevertheless, she loves Maren, and does not want her to turn into a mermaid. O’Neill promises Clara they will find a way to stop Maren’s transformation before he leaves to continue on business.

As the winter sets in, Auntie purchases a massive bathtub for Maren since Maren must now be touching water because her changing is progressing faster. Maren is made weak by the changes. Clara and Auntie realizes that Maren must be taken to the ocean or she will die. O’Neill sends Pilsner the messenger raven to Clara, saying he will return in March. When Scarff and O’Neill return in the spring, O’Neill agrees to accompany Clara to bring Maren to the ocean. It is then revealed that Scarff and Auntie are not just a couple, but married. Having immigrated from England years before, they came across Llanfair Mountain which angered the dark witch living there, who accused them of wanting to steal her territory. She then put a spell on Auntie and Scarff, forbidding them from being together for more than 13 days in a year, during which time Auntie would be forced to live on the mountain. Only when many things were in place, such as a raven coming to the mountain, would the spell be broken. Scarff now plans to make his home on the mountain.

Clara, Maren, O’Neill, Osbert, and Pilsner set off for the sea in a caravan wagon. However, an obsessed admirer of Maren’s, Simon Shumsky, follows them and sets the caravan on fire. He kidnaps Maren, but is stopped by Dr. Phipps and his traveling medicine show. Dr. Phipps, his wife, Madame Soraya, and their son, Jasper, save the lives of Clara and O’Neill. They say a debt has now been incurred, and Clara, Maren, and O’Neill will now have to perform in the show. Clara and O’Neill panic as the show heads north toward Canada rather than East toward the ocean. Maren weakens rapidly. They are also alarmed to learn that Jasper is a murderer, and has killed countless people forced into the show in the past. However, the Phipps end up fighting one another, with Dr. Phipps revealing that Jasper truly runs the show, and that he has covered for Jasper long enough. Osbert attacks Jasper, throwing Jasper into the air where a larger dragon eats him. Clara and O’Neill rush to the ocean with Maren.

At the ocean, O’Neill begs the Sea King to let Maren remain human, but the Sea King explains that Maren has always been a mermaid, and must now live among her kind. O’Neill believes he has failed Clara, but Clara insists he has not. She feels bad for him since he was in love with Maren and now cannot have her. But O’Neill reveals he has truly loved Clara all along, and his efforts to save Maren were to make Clara happy. Clara is delighted. On the way home, she and O’Neill are married by the priest who found O’Neill years before. Back on the mountain, Scarff and Auntie are thrilled to have them home.

More summaries and resources for teaching or studying The Mermaid's Sister.