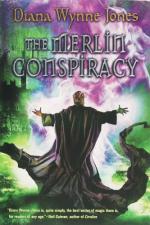 Diana Wynne Jones
This Study Guide consists of approximately 24 pages of chapter summaries, quotes, character analysis, themes, and more - everything you need to sharpen your knowledge of The Merlin Conspiracy.

"The Merlin Conspiracy" is the story of a young boy and girl, who must protect their different worlds from a magical conspiracy. The book begins from the point of view of Roddy, an adolescent girl who lives in a magical world and has a close friend, Grundo, who she looks after as he is considered rather slow. At a meeting of the English king with the Scotch king, however, the Old Merlin drops dead, and the Scotch king takes it as an insult and retreats. There are suggestions of foul play, but nothing definitive.

Meanwhile, in a world resembling our own, Nick goes with his father to a writing conference, where he is swept away into Roddy's world and mistaken for a guard. Captured by a group looking after the Prince of Wales, Nick must go into a trance-like state to look out for psychic enemies. There, he meets Romanov, an older and very clever wizard.

In Roddy's world, the King's procession goes to a nearby castle, where Grundo's mother, Sybil, fools everyone with water from an enchanted stream. Grundo and Roddy don't drink it, and later hear Sybil and the new Merlin, among others, plotting; however, because everyone else has been enchanted, nobody believes them. At this point, Roddy is summoned to her grandfather's house in Wales; he makes her very uncomfortable, but she nevertheless tells him about the plot.

Nick, meanwhile, overhears that he has been spotted as a fake, and flees the guards, looking for Romanov. He ends up in the woods, where he runs into an old drunk who helps him by giving him a light. He then sees Roddy, who has summoned him to help with the overthrow of the conspiracy; however, he doesn't understand.

Roddy and Grundo explore an old village nearby, where Roddy picks up the strong magic of a witch who used to live there. When they return to the house, they go to sleep; Gwyn, the grandfather, is gone by the time they wake. Roddy tries to call the Little People for help, as well as the wizard (Nick), but isn't sure about any of their help. She tries to return to the King's procession, but they have moved on and nobody knows where they are.

Nick then gets trapped in his alternate world, but escapes with the help of an elephant he finds trapped between worlds. He and the elephant, Mini, go to Romanov's world, where the older wizard has fallen ill. Romanov's wife calls angrily on the telephone, but Nick ignores her. Romanov gets worse and worse, and a flying machine lands on his lawn. It is Maxwell Hyde, a Magrid who travels between worlds to help keep them in order. He tells Nick that he's under a spell to get Romanov sick, and tells him to bathe himself in salt water. Afterward, Hyde and Nick talk, and Nick realizes that Roddy is Hyde's granddaughter.

Not sure of where to go, Roddy goes to her relatives in Dimber, but finds that a pair of annoying twins as well as some enchanted objects cause annoyances and deep problems. Nobody can reach Hyde. When Roddy tries to help the creatures caught in the objects to get a more fair bargain, her grandmother sends her off to the Lady of Governance. However, although Roddy tries to explain about the conspiracy, the Lady does not believe her.

Nick accompanies Hyde to Blest, Roddy's world, and stays with him in London. He has magic lessons, and Hyde reprimands his daughter Dora for using salamanders, dangerous magical creatures. Fires are breaking out all over the country, and death, in the form of Gwyn, comes for Hyde.

Roddy goes to London, and finds Nick there. She discovers that her parents are no longer with the King. Meditating, Nick realizes that Hyde is still alive. The twins show up, and Nick realizes that they will need Romanov's help. With his goat, they travel to find Romanov, and then back to the world of the arcade. There, they find many people trapped by strong binding spells used by a trainee Prayermaster who earlier tried to kill Romanov. Roddy uses her new magic to help unbind all of the trapped magic people. Nick then calls on the white dragon of England, and it is revealed that the new Merlin is actually a fake one.

At the end of the book, Grundo is in the running to be the new Merlin, and Roddy will go with Maxwell Hyde before beginning training as the next Lady of Governance.

More summaries and resources for teaching or studying The Merlin Conspiracy.