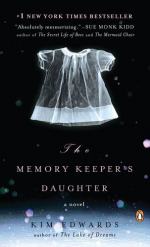 This detailed literature summary also contains Topics for Discussion and a Free Quiz on The Memory Keeper's Daughter by Kim Edwards.

The Memory Keeper's Daughter by Kim Edwards is a poignant story of marriage, parenthood and a secret that entwines itself throughout the emotional lives of a family and, eventually, tears it apart. Happily married, Dr. David Henry and his wife Norah are expecting a child in the middle of a stormy winter in 1964. Having made the treacherous drive through deep snow with Norah in labor, they meet with David's nurse, Caroline Gill, and prepare Norah for the birth. Norah gives birth to a healthy baby boy, but shortly thereafter, also gives birth to a small girl who has obvious signs of Downs Syndrome. David asks Caroline to remove the girl baby so that his wife will not know. He tells Norah that she did give birth to a daughter, but that the little girl was stillborn. In the meantime, Caroline Gill, per instructions, takes the tiny infant to a home and finds the conditions so deplorable she is unable to leave the baby there. Unmarried and somewhat in love with her boss, David Henry, she decides to keep the baby herself and raise her as her own.

Since Norah was never allowed to see the girl baby named Phoebe, and David tells her that he had the child buried already, Norah holds a service for her and mourns her loss, even though she is happy to have their healthy son, Paul. Not seeing the lost baby, however, begins to haunt her and she feels Phoebe's presence, becoming obsessed with the loss of her. David finds out from Caroline Gill that Phoebe is with her and, although he means and intends to tell his wife the truth, it has gone too far and would be too difficult to shock her with the knowledge that her daughter is alive. David begins to live in the throes of guilt and withdraws from his wife and son for reasons unknown to them. He becomes obsessed with photography, while Norah begins to have affairs with other men. Paul, as he grows up, is emotionally neglected by both parents due to their being so wrapped up in their own pain. Norah becomes a successful travel agent, Paul finds his talent as a musician. David, on a journey to his ramshackle childhoood home, discovers a pregnant young girl whom he takes under his wing, sharing his secret of Phoebe with her. He eventually moves away from Norah and Paul, and spends his time with a young woman named Rosemary and her little boy, Jack. David eventually dies, and Caroline Gill finally goes to Norah with the truth about her daughter, who is now grown and wants to get married. Norah and Paul take Phoebe into their hearts and try to adjust to having her in their lives. It is a sweet ending to a very sad and destructive series of events that could have been avoided if David had not wanted to protect Norah from the pain of having a retarded and, perhaps unhealthy, daughter. Because he saw his own mother suffer over the loss of his young sister, he feels he can eliminate that pain for Norah, not considering that it may be more painful for Norah to have never had Phoebe.