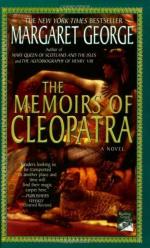 The Memoirs of Cleopatra: A Novel Summary & Study Guide

Margaret George
This Study Guide consists of approximately 41 pages of chapter summaries, quotes, character analysis, themes, and more - everything you need to sharpen your knowledge of The Memoirs of Cleopatra.

The Memoirs of Cleopatra: A Novel Summary & Study Guide Description

The Memoirs of Cleopatra: A Novel Summary & Study Guide includes comprehensive information and analysis to help you understand the book. This study guide contains the following sections:

This detailed literature summary also contains Topics for Discussion and a Free Quiz on The Memoirs of Cleopatra: A Novel by Margaret George.

Cleopatra is just seven years old when the Romans arrive in Egypt. She pleads with her father for the opportunity to attend a banquet in the honor of the Romans. When her father makes a fool of himself, she takes control of the situation and becomes the center of attention. Years pass and her father is exiled. Cleopatra's older sisters take advantage of his absence and take control of the throne. Cleopatra attempts to remain out of sight of her sisters, hoping that she won't be killed for being a threat to them. The two young women are in control only a short time when the older is murdered by the younger. The younger then marries and prepares to be ruler, but Cleopatra's father overthrows her and Cleopatra is forced to watch as her sister is publicly executed. Cleopatra becomes co-ruler with her father and remains in that role until her father's death. Then her younger sister and brother take the throne and Cleopatra is left outside the city of Alexandria.

The Romans return and Cleopatra finds herself ready to call on Caesar to help her regain her throne. Caesar obliges and the two rulers begin a love affair that lasts for years. Cleopatra's two younger siblings are eventually killed in later upheavals and she is left with only one younger brother. In keeping with tradition, she marries him in order that they be co-rulers, but they remain in fact chaste in their love for each other. Cleopatra has a son, fathered by Caesar, and the boy is soon known as Caesarion, or "Little Caesar." He is not acknowledged in Rome, a fact that haunts Cleopatra, so that she forces Caesar to publicly recognize Caesarion as his son, though the boy inherits nothing upon his father's death.

Caesar's death leaves Rome in an uproar, and Marc Antony soon emerges as a leader. He summons Cleopatra, but she refuses to comply for some time. Upon their first meeting, they begin an affair. Cleopatra delivers twins but doesn't tell Antony of her pregnancy. He marries the sister of a political ally but eventually leaves her to marry Cleopatra. The two join military forces and fight to gain control of a vast empire. The wealth of Egypt means that Antony can hire a great many troops but rumors cause many of those to defect.

As Cleopatra and Antony face the realization that they are to be overrun by Romans, they are forced to make some dramatic decisions. Cleopatra sends Caesarion away, hoping to keep him safe. Antony, fearing that he is about to be captured in battle, stabs himself but manages to make it back to the castle, where he dies in Cleopatra's arms. She knows that she's going to be taken to Rome where she'll be paraded in a triumphal parade celebrating the fall of Egypt and convinces her captors to allow her a feast in Antony's tomb, a ritual of importance to her culture. There she has arranged for an asp to be delivered in a basket. She holds to the snake so that it bites her. Her childhood friend and confidante Olympos picks up the story at her death and says that Caesarion is later captured and killed as well. The remaining three children are taken to Rome where they are marched in the triumphal parade and then taken into the home of their captor.

More summaries and resources for teaching or studying The Memoirs of Cleopatra: A Novel.

The Memoirs of Cleopatra: A Novel from BookRags. (c)2022 BookRags, Inc. All rights reserved.