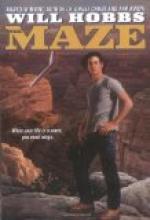 Get The Maze from Amazon.com
View the Study Pack
View the Lesson Plans
Study Guide
Order our The Maze Study Guide

Will Hobbs
This Study Guide consists of approximately 33 pages of chapter summaries, quotes, character analysis, themes, and more - everything you need to sharpen your knowledge of The Maze.

The Maze Summary & Study Guide includes comprehensive information and analysis to help you understand the book. This study guide contains the following sections:

This detailed literature summary also contains Topics for Discussion and a Free Quiz on The Maze by Will Hobbs.

In the Maze, Rick Walker is mired in the foster care system, and his life seems like a maze he can't escape. While running away from a youth detention center, Rick ends up in Canyonlands National Forest, where he meets Lon, a biologist working to re-release endangered condors into the wild, and discovers two illegal gun-runners. Rick learns about condors, exposes the gun runners, and finds a way to let go of his anger.

As the novel begins, Rick Walker is in court for throwing rocks at a stop sign. He doesn't know why he did it. He was just full of anger. He is sentenced to six months in a youth detention center, where he reads at the library, works out, and keeps his head down. Still, Rick gets into trouble when he tells his social worker about corruption among the guards, and he becomes the target of planned beatings. Fearing for his life, Rick runs away. He hitchhikes, and then hides in a truck. He finds himself in the middle of nowhere, in Canyonlands National Forest.

Rick meets Lon Peregrino, another former foster child who is a biologist working on a program to re-release condors into the wild. Lon lets Rick stay with him, and while he is there, Rick learns about the condors. He also learns that two men who periodically camp in the park are doing something illegal, and Lon is in their way. Lon suspects the men are stealing pots from Native American sites.

Lon shows Rick how he hang-glides, sometimes with his pet eagle. Rick, who has had flying dreams all his life, is fascinated. Rick and Lon also talk about their lives. Lon was a foster child who ended up with a veterinarian, where he learned about birds. Rick's grandmother died when he was ten, and since then, he's been shuffled from foster home to foster home. He is filled with anger. Lon says he needs to let go of his anger to move on with his life.

Rick discovers that the two men are smuggling illegal weapons, which they have stashed in a canyon in the Maze, a series of interlocking canyons. One day when Lon is trying to recapture one of the condors who has flown too far, he stumbles on the men's second cache of weapons. The men shoot at Lon and force him to jump into a crevasse that he can't get out of. They expect the coming rain storm to drown him.

The men have stolen Lon's communication equipment and extra gas, so Rick can't get help. Rick flies Lon's hang glider over the Maze to locate Lon, then he makes a hazardous landing and rescues Lon as the storm begins to rage. Afterward, Lon arranges a court hearing for Rick. With the testimony of Lon and others, and with Rick's own statements of how he's changed, Rick's remaining sentence is converted to a summer working with Lon's condor rehabilitation program. Rick has let go of his anger and is ready to move on.

More summaries and resources for teaching or studying The Maze.

The Maze from Gale. ©2005-2006 Thomson Gale, a part of the Thomson Corporation. All rights reserved.