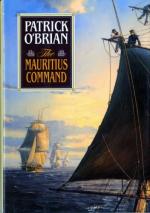 Patrick O'Brian
This Study Guide consists of approximately 33 pages of chapter summaries, quotes, character analysis, themes, and more - everything you need to sharpen your knowledge of The Mauritius Command.

This detailed literature summary also contains Topics for Discussion and a Free Quiz on The Mauritius Command by Patrick O'Brian.

Captain Jack Aubrey is appointed Commodore and sent to capture the French-held islands of La Reunion and Mauritius. Using a small fleet and drawing support from the British-held island of Rodriguez, Aubrey sets about reducing the French Indian Ocean fleet. Aubrey's particular friend, Stephen Maturin, assists by making intelligence contacts, distributing anti-French propaganda, and gathering local intelligence. After many months and several setbacks, Aubrey and Maturin are ultimately successful and both islands are captured from the French.

Aubrey's command is hampered by the fact that the French forces on land and at sea are superior in number and weapons. Also, Aubrey's nearest base is nearly three thousand miles away at Cape Town, and in addition to prosecuting military conquest he must protect British commercial shipping from India. His French opponent wisely declines combat on any but the most advantageous terms. Aubrey proceeds with his characteristic vigor, however, and makes an initial strike before the French are even aware that he is in the area. Taking infantry forces from Rodriguez, Aubrey strikes at a central port and main fortress of La Reunion, capturing and holding them for a day. During that time, his men destroy military stores, demolish the local fortresses, burn government records and buildings, and leave the civilian populace entirely alone. Meanwhile, Maturin distributes much British gold and anti-French broadsheets and makes local contacts.

Aubrey continues to coordinate his activities and gains additional local forces. Assisted by Colonel Keating, Aubrey then launches a large-scale invasion of La Reunion and captures the island after a brief campaign. With a new base of operations, he installs Governor Farquhar and concentrates his forces. Along with La Reunion, Aubrey captures a huge amount of stores and weaponry for his fleet. These events find Aubrey at the pinnacle of his individual success in the campaign. What follows is a series of military disasters precipitated by his subordinate captains' competition. As each tries to outdo the next, they enter into a bumbling series of disastrous engagements that leave nearly the entire British fleet captured or destroyed. When a reinforcing frigate arrives, its hot-headed captain closes with a superior French force without waiting for a tactical advantage, and the new frigate is nearly destroyed. After this series of naval disasters, Aubrey finds himself at the nadir of his personal command. There is a very real fear that the French will recapture La Reunion.

Meanwhile, Maturin undertakes a difficult surgery, and the superstitious Aubrey links his own fate to the recovery of the patient. Fortunately, the man survives and recovers, and Aubrey manages to gain a small tactical victory over the French forces. And then an Admiral arrives with a vast fleet stuffed with marines, and Aubrey's days of independent command are effectively ended. The superior British forces quickly capture Mauritius and Aubrey is returned to England bearing the happy news of Mauritius' capture. His various actions have earned him wide repute and a goodly amount of prize money, too.

More summaries and resources for teaching or studying The Mauritius Command.