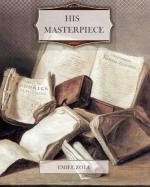 Émile Zola
This Study Guide consists of approximately 55 pages of chapter summaries, quotes, character analysis, themes, and more - everything you need to sharpen your knowledge of The Masterpiece.

The Masterpiece Summary & Study Guide includes comprehensive information and analysis to help you understand the book. This study guide contains the following sections:

This detailed literature summary also contains Topics for Discussion and a Free Quiz on The Masterpiece by Émile Zola.

Émile Zola's novel, THE MASTERPIECE, is a semi-autobiographical work telling a story of artistic and political rebellion among a group of aspiring young artists and writers in Paris of the 19th century. Accepted leader of the Bohemian group is the brilliant artist, Claude Lantier, who is haunted by the need to create his masterpiece. He knows what he wants to do but seems forever incapable of accomplishing his goal because of personal insecurities. Falling in love with an innocent young woman, Christine, he begins to live with her and they start out their relationship in blissful romance. Christine is kept hidden from his group of friends who are young men that began their association as school boys in Plassans all now residing in Paris. The artistic abilities of this group include painting, sculpting, architecture, music, and literature. They have a self-avowed rebellion against the Romanticism in art with the aim of producing a new art form of realism for the modern world. As they rage against the status quo, they become known as upstarts who are shunned by the current artistic establishment.

Gradually, the resolve of the group begins to break down as some of them are defeated by their own inadequacies while others, such as Fagerolles and Dubuche are lured into the Society they used to rail against. Their success comes with a high cost after they take the shortcuts to arrive at their desired destinations. The character of Irma Bécot, the common trollop who rises to wealth and notoriety is a parallel to the way Fagerolles and Dubuche prostitute their ideals for success. Sandoz is the only one of the group of friends who finally gets to the top without compromising his convictions. Yet, even with him, success does not hold the satisfaction he assumed it would have. He is the one character who comes to understand the older artist Bongrand who tries to tell the younger artists that the real pleasure is that time spent in reaching for the top rather than being there after a big success. Jory, the journalist, represents a kind of amorality. He actually has no convictions and is content to settle for whatever he can get by putting forth the least amount of effort.

In the end, the friendships deteriorate in the face of repeated failures and wrong choices. Claude never finishes his masterpiece and Christine fights a losing battle with Art, her rival for Claude's affections. Christine is tragic in that she is undone by her deep love for Claude. It takes her some time to recognize her competition for Claude's affections. In her drive to win him back the way they were when they first began their affair, Christine sacrifices her son, Jacques, through neglect. As the initial passion between Claude and Christine unravels, Claude becomes infatuated with the nude woman he attempts to paint but always fails. He has reverted to that point in his life where he worships the painting of a nude Woman, but is indifferent to the body of his wife or a model. Claude slips into madness, only prevented from jumping into the Seine by the call of his Woman in the unfinished canvas that is meant to be his illusive masterpiece. As though bewitched by his painted Woman, he paints her as a jeweled goddess with a rose between her thighs and beneath her belly. Finally realizing that he can never satisfy his goddess, Claude hangs himself in front of his mutilated canvas.

More summaries and resources for teaching or studying The Masterpiece.

The Masterpiece from BookRags. (c)2022 BookRags, Inc. All rights reserved.