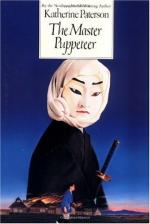 Katherine Paterson
This Study Guide consists of approximately 77 pages of chapter summaries, quotes, character analysis, themes, and more - everything you need to sharpen your knowledge of The Master Puppeteer.

This detailed literature summary also contains Topics for Discussion and a Free Quiz on The Master Puppeteer by Katherine Paterson.

Jiro is a boy living in feudal Japan with his parents, who make puppets for the local puppet theater. Jiro apprentices himself to the theater so that his parents will have more to eat. He makes friends with the other apprentices, especially a boy called Kinshi. As time passes, Jiro begins to realize that Yoshida, the puppet master, is linked to the bandit Saburo. When Kinshi is determined to help the city's poor, whatever the cost, Jiro decides to appeal to Saburo. Unfortunately, he has misunderstood the situation, and it is actually the blind chanter Okada who is Saburo. Okada confronts him and he runs away. As riots break out in the city, Jiro tries to find Kinshi and his missing mother. He saves them and returns to the theater, where Okada decides to trust and accept him.

Jiro lives with his parents, Hanji and Isako, in a small house in the city of Osaka. He helps his father make puppets for the puppet theater, but they do not have enough work to buy enough food for the family. The owner of the theater, Yoshida, expressed an interest in Jiro, so Jiro decides to apprentice himself there. The theater will feed and house him, meaning his parents will have more between them. At the theater, he is accepted by the blind chanter called Okada and he befriends a kind boy called Kinshi.

Kinshi teaches Jiro the ways of the theater and helps him to practice for the performances. Jiro meets the other apprentices and makes friends with them. He soon finds that he is fitting in and doing well. However, things are not so good at home. He receives news that his parents have gone to the country because his father is sick. At New Year's, his mother comes back alone, and Jiro goes to see her. He takes her food, and is dismayed to see that she is starving and unhappy. On his way back to the theater, he is attacked by a ronin but saved by Yoshida, who was supposed to be sick in bed.

Okada writes a new play about a bandit called Joman. One night, the bandit Saburo leaves a note at the theater demanding they put on a special performance of the play for the city's poor. Saburo will attend. At first the authorities are not keen, but when they realize that it will be a chance to catch the bandit, they agree. The play goes ahead, and Saburo uses the messages in it to convince the poor not to betray him if they ever get the chance. He then robs the police and leaves. Jiro is suspicious of Yoshida's behavior, as he is sure the master puppeteer was putting on an act to convince the authorities to allow the play to go ahead.

The city's poor grow more restless and bands of night rovers begin to roam the streets at night, throwing rocks at random buildings. One night they come to the theater begging for food, but Yoshida will not give it to them. Kinshi feels sorry for them and is determined to help. He starts going out at night, and Jiro is afraid he is putting himself in danger. One day while Jiro is practicing with the puppets in the storehouse, he finds a samurai sword belonging to the men Saburo robbed at the performance. He is now convinced that Yoshida is Saburo. He is afraid of Yoshida, so he decides to appeal to Okada, to see if Saburo will meet with Kinshi. He hopes this will persuade Kinshi not to go out at night.

However, Jiro has misread the situation. Saburo is not Yoshida but is actually Okada. Okada confronts him and Jiro is afraid. He runs away. Meanwhile, riots are breaking out in the city and Kinshi is missing. Jiro goes out to look for him, but meets his father on the streets instead. Hanji tells Jiro that he was never sick, and is a member of Saburo's gang. He also tells Jiro that his mother is missing. Jiro goes out to look for them again, and finds them at the police station. Jiro disguises himself as a fireman to get them out. He is almost caught out in his lie, but he manages to get away. He is horrified to see that Kinshi's hand has been cut off, which happened when Kinshi was trying to stop Jiro's mother from stealing from a merchant's house.

They take Kinshi back to the theater, where he is looked after by his mother and Jiro's mother. Okada has decided to forgive and trust Jiro, and Yoshida formally offers him a place at the theater. He also says that Jiro's mother can stay there and be cared for. Kinshi will be taken in by Okada. This is a happy ending for both boys.

More summaries and resources for teaching or studying The Master Puppeteer.