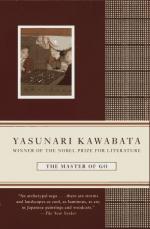 The Master of Go Summary & Study Guide includes comprehensive information and analysis to help you understand the book. This study guide contains the following sections:

This detailed literature summary also contains Topics for Discussion and a Free Quiz on The Master of Go by Yasunari Kawabata.

The Master of Go by Yasunari Kawabata chronicles a championship game of go, an ancient and traditional Japanese board game. The game takes place in 1938 between the highest ranking player in Japan, Honnimbo Shusai, the "Master of Go," and a younger challenger, Otake. In an epic struggle that lasts over half a year, the younger challenger defeats the master, who dies shortly after the match concludes, signaling the end of an era in the tradition of go and in Japanese culture as well.

The match is to be the last for the Master, and is sponsored by a Japanese newspaper that sends a reporter, Uragami, to write regular articles on the match, which is played out over nearly half a year in several locations. The story is told from the view of Uragami, who has great reverence and respect for the Master, and is directly involved in the action of the story. Uragami himself is a talented amateur go player, and his devotion to the game and its traditions are evident.

The Master is old and frail and suffers from heart problems. When he falls ill, the match is postponed while he recuperates. More and more concessions are made to the Master to accommodate him, and the younger challenger grows impatient and threatens to forfeit the match. Uragami convinces him to continue to the end, despite the Master's increasingly deteriorating condition. The Master himself seems to be above all the disagreements and drama, with the expectation that deference will be paid to his high position.

Uragami describes the great deliberateness with which each player decides on his next play, sometimes taking several hours to determine a move. The players are "put in cans" for much of the match, meaning they are sequestered at an inn, where they do nothing but play out the match in day-long sessions broken up by rest days. During these rest periods, Otake anguishes over the match and visits with his family while the Master seems to put the game completely out of his mind, filling his time playing other games incessantly, such as billiards and chess.

The extreme physical and mental stress placed on the players is evident in the anguish expressed by Otake and the declining health of the Master. The match is described in terms of the younger, brasher Otake representing a new direction in Japanese culture, which is at odds with the older aristocratic world of the Master. Neither man gains a distinct advantage over the other until very late in the game, when the Master makes a crucial play that Otake is able to exploit to defeat him. In the end, Otake wins the match and the Master dies just a few weeks later.