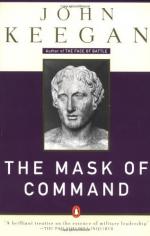 The Mask of Command Summary & Study Guide includes comprehensive information and analysis to help you understand the book. This study guide contains the following sections:

This detailed literature summary also contains Topics for Discussion and a Free Quiz on The Mask of Command by John Keegan.

Sir John Keegan is a British military historian, lecturer, and author of The Mask of Command. Keegan is best known for his comprehensive works on military history, with particular focus on military figures and battles from fourteenth through twenty-first centuries. The Mask of Command allows Keegan to effectively dissect the technical aspects of warfare, particularly as it relates to Alexander the Great, Arthur Wellesley Wellington, U.S. Grant, and Adolph Hitler. Keegan is also known for uncovering the psychology used in battle.

The Mask of Command is a work of non-fiction, separated into five parts. Although each part is separate unto itself, the parts are frequently referenced in other areas for the sake of comparison.

The first part, "Alexander the Great and Heroic Leadership", details the life and conquests of Alexander the Great, son of Philip II of Macedon. Alexander would become known worldwide for being the leader who did what no other could do before or since - conquer states and entities on several continents and create a kingdom greater than any other. Alexander is also credited as being the inspiration of many legends and created the basis for modern warfare.

The second part, "Wellington the Anti-Hero", reviews Wellington's illustrious military career in Britain, from an eight year exile in India to the defining moment in his career - the defeat of Napoleon at Waterloo. Keegan also discusses Wellington's later achievements and numerous accolades as well as his stint as the beloved and revered Prime Minister of Britain.

The third part, "Grant and Unheroic Leadership," covers the history and military rise of Civil War General Ulysses S. Grant from his humble beginnings as a mediocre student and soldier to commander of the Armies of the United States. Grant went on to become an integral contributor to the government's military cabinet and was named as the eighteenth president of the United States.

The fourth part, "False Heroic, Hitler as Supreme Commander", focuses on Adolph Hitler, the Third Reich, and the quest for world domination during World War II. Keegan covers Hitler's military strategy, his demand for loyalty until death and the failure of his reign as fuhrer.

The fifth part, "Conclusion: Post-Heroic: Command in the Nuclear World", is a look at the military tactics and ideals that have worked over the centuries. Keegan asserts and explains why those tactics that had served the leaders well will no longer apply in a nuclear world and recognizes the call for a new strategy of war.

Although it would be easy for an expert such as Keegan to insert one's own opinion on any of the numerous topics, Keegan manages to stick to the facts, some of which are little known or have been lost in the history books, and presents the information as objectively as possible even when there are hints of informed opinion available to the reader.

The Mask of Command from BookRags. (c)2022 BookRags, Inc. All rights reserved.