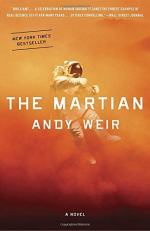 The Martian Summary & Study Guide includes comprehensive information and analysis to help you understand the book. This study guide contains the following sections:

This detailed literature summary also contains Quotes and a Free Quiz on The Martian by Andy Weir.

“The Martian” by Andy Weir is the story of Mark Watney who is a crew member of the Ares 3 mission to Mars. The crew had traveled the nearly year-long journey from Earth’s orbit to Mar’s orbit on the Hermes and had used the Mars descent vehicle (MDV) to land on the planet’s surface. Earlier pre-supply drops at the Ares 3 site had provided the crew in advance of their arrival with essential items for their health and well-being as well as equipment to conduct their duties, experiments and research. The Hab, the living quarters for the crew, was one of the items that was dropped earlier as well as the MAV (Mars ascent vehicle) which would enable them to return to the orbiting Hermes for their journey home.

As the title of the crew indicates, Ares 3 was the third mission to Mars in the NASA series. The two earlier missions had been successful and did not experience any major problems. Confidence was robust at NASA and within the Ares 3 crew that their mission would follow their predecessors in its success in advancing space travel and learning more about Mars. However, Ares 3 did not at all go by script.

After the astronauts had erected the Hab and created a safe environment within it, they faced a vicious and unrelenting sandstorm. Visibility was zero on the planet and NASA feared that this storm, like many on Mars, could literally last months. NASA deemed the storm dangerous and life-threatening for the astronauts and scrubbed the mission. The astronauts were to board the MAV and return to the Hermes for their flight home.

As the astronauts were heading to the MAV, the storm raged even more ferociously. As Mark stumbled toward the MAV as best he could, an antenna dislodged from the Hab and struck him with full force. It knocked him down and he soon lost consciousness. The other crew members made it to the MAV and the headcount was five instead of six. Houston, they had a problem.

The astronauts’ spacesuits are equipped with monitors that send vital sign stats to the other astronauts. There were no signs of vitality reported from Mark’s suit. He was dead. The commander tried in vain to find Mark’s body. It was impossible given the wind and sand to see more than a few inches in front of her face and she had to give up her search. The MAV was revved up and ready to ascend to their rendezvous with Hermes. They had to leave their dead colleague behind.

But Mark woke up. He wasn’t dead but he was abandoned. When he saw that the MAV was gone, he knew that he had the challenge of his life ahead of him. Failure to meet that challenge meant certain death. In remote imagery from the Ares 3 site on Mars, NASA noticed that things were moving. The rover vehicle was parked in one spot one day and in another the next. It meant only one thing – Mark Watney was alive.

The challenge to keep Mark alive was suddenly not just his alone. NASA put one-hundred percent of their efforts on figuring out a way to rescue Mark or at least keep him alive until Ares 4 arrived four years later. There was never a consideration of the billions of dollars that it was taking to rescue this lone astronaut. There wasn’t enough food and there were dangers of air leaks in the Hab that was meant to last a month that could take his life while he slept. The whole world watched and waited and rooted for the brave astronaut to be saved.

The challenges, disappointments, frustrations and near-death experiences that Mark faced during the more than eighteen months he lived on Mars and during the risky rescue attempt had never before been imagined. NASA and the Ares 3 crew were dedicated to Mark’s rescue and did everything within their powers and abilities to save their fellow space traveler. But it was Mark’s hard work and refusal to give up that proved to be most crucial.

Mark Watney made space exploration history and not in any way he would have ever chosen.