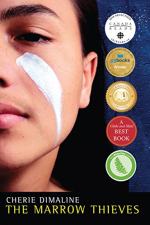 This detailed literature summary also contains Quotes and a Free Quiz on The Marrow Thieves by Cherie Dimaline.

• Note: Chapter numbers have been added in this guide for clarity.

The general population of this futuristic world have lost their ability to dream, and the lack of dreams is driving people mad. The exception is the Native American population, because they have somehow retained their dreams. The government discovers that Native Americans can be harvested for their dreams, though each person is reduced to the contents of a single vial in the process. The result is that Native Americans are running for their lives as an entire branch of government has been created to hunt them down and harvest them for their dreams. The agents, called Recruiters, use any means necessary to track down and capture Native Americans, including turning some members of this cultural group into informants.

French is a youngster who is on the run with his brother, Mitch, when the Recruiters find them. Mitch sacrifices himself so that French can escape. Very young and on his own in a hostile world, French is soon too sick to survive on his own. A group of Native Americans, led by Miigwans (called Miig), discovers French and nurses him back to health. By the time French is 16, he is a strong young man who is learning the ways of the Native Americans, and he is an accepted member of the family-group led by Miig. Miig and his partner, Isaac, were living in the wilderness when Recruiters captured Isaac. The oldest member of the group is Minerva, who is often carried by some of the stronger young people. She is respected though she seems to provide very little in the way of support to the group. The youngest member of the family-group is RiRi. She is a toddler when French arrives and is seven by the time the main story line opens. RiRi is frustrated that she is still too young to know the full truth about the history that brought them to this point. The others, including French do their best to protect both Minerva and RiRi.

By this time, some Native Americans have become informants for the government. They alert the Recruiters when they encounter other Native Americans. French and his group encounter two of these informants, and one of them kills himself and RiRi when they fall off a cliff. French kills the other informant and the group has to run for their lives. A short time later, Minerva allows herself to be captured so that the remainder of the group is safe. French realizes that the youngest member and the oldest member of their group had provided hope for the future and the roots of their cultural history, and that the group is floundering without those elements.

French's group encounters another group of Native Americans who have created a settled life for themselves in a series of caves and a protected valley. French discovers that his father, Jean, is living with this group and they renew their relationship, though they grieve for the loss of French's mother and brother. While they are trying to make a plan to rescue Minerva, they discover that she had sang one of the songs of her people, and that song had destroyed one of the government facilities. With the realization that Minerva is key to their survival, French and the others set out to rescue her. The attempt fails when a government official shoots Minerva to keep her from escaping.

French and the others move to a new location and encounter another small group of Native Americans. French discovers that one of them is Isaac, and he tells French that he dreams in his Native American language. French realizes that the people who dream in their native languages are like Minerva.

The novel is set is a futuristic world in which society has collapsed and much of the world's population has died. While the novel can be read literally, it can also be considered symbolic of the trials Native Americans have faced over the past centuries as they have been assimilated into white society and have left some aspects of their traditional heritage behind.