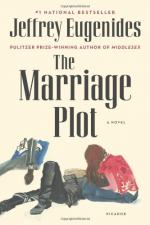 This detailed literature summary also contains Quotes and a Free Quiz on the Marriage Plot by Jeffrey Eugenides.

The Marriage Plot follows the life of Madeleine Hanna, a literature student at Brown University in the 1980s, as she faces the trials and tribulations of her relationship with her boyfriend Leonard Bankhead, who suffers from manic-depression, as well as her close friendship with another student, Mitchell Grammaticus, who hopes that their relationship will eventually lead to them becoming more than just friends.

“A Madman in Love” took place at Brown University. On graduation day, Madeleine woke up with a severe hangover after a night of heavy drinking brought about by her heartache over her recent breakup with her boyfriend Leonard. Madeleine met her parents for breakfast before graduation. They saw Mitchell across the street and suggested Madeleine should invite him to join them for breakfast. Madeleine did so, despite the fact that she had not been speaking to Mitchell for several months after he sent her an angry letter accusing her of leading him on.

When Madeleine first started studying at Brown, she had a passion for studying Victorian literature. Later, she took a class in a newer approach to literary analysis called Semiotics, where she met Leonard. Madeleine and Leonard began happily dating but things turned sour when Madeleine told Leonard that she loved him and Leonard responded cynically by saying her declaration was meaningless. On graduation day, Madeleine heard that Leonard had been hospitalized after a psychiatric breakdown related to his manic-depression. Madeleine skipped her graduation to visit him and they reconciled.

“Pilgrims” took place in the United States and Europe. Mitchell began a year of travelling with his friend Larry in Paris, France, where they were due to stay with Larry’s girlfriend Claire. Mitchell felt uncomfortable staying with the couple so found his own accommodation elsewhere. Larry broke up with Claire and they continued on their trip.

Back in the United States, Madeleine cared for Leonard after he was discharged from the hospital and they moved in together at a research institute where Leonard had been awarded a fellowship. Leonard insisted on keeping his mental health problems a secret from everyone except Madeleine, but Madeleine’s family came to visit and found Leonard’s prescription.

Larry and Mitchell continued their trip in Greece, where Mitchell received a letter from Madeleine. Over the summer, Madeleine and Mitchell had run into each other in New York and had kissed. Madeleine’s letter told Mitchell that she was committed to Leonard and nothing would ever happen between them. Larry began a relationship with a Greek man and he and Mitchell agreed to part ways and catch up with each other later in the trip.

“A Brilliant Move” took place at Pilgrim Lake, where Leonard was completing his research fellowship. After being released from hospital, Leonard felt increasingly dependent on Madeleine. Further to this, he was struggling with severe depression and unpleasant side effects from his medication. Against the advice of his doctors, Leonard started to experiment with the dosage of his medication, leading to him beginning a manic episode. Leonard proposed to Madeleine.

“Asleep in the Lord” took place in Calcutta, India, where Mitchell was volunteering at a home for the sick and dying run by Mother Teresa. Mitchell found the home distressing and avoided helping with the more unpleasant tasks assigned to the volunteers. One day, after being unable to avoid becoming involved with caring for the patients, Mitchell walked out of the home and never went back. He wrote a letter to Madeleine imploring her not to marry Leonard and left Calcutta.

“And Sometimes They Were Very Sad” took place in Europe, New York, and Madeleine’s parents’ home. Madeleine married Leonard, overlooking signs of his returning mania. On their honeymoon in Europe, Leonard had a full-blown manic episode and was hospitalized. They moved in with Madeleine’s parents while Leonard recuperated. Madeleine was accepted to a graduate literature program at Columbia and she started searching for an apartment in New York. Leonard was uncomfortable about being financially dependent on his wife. They went to a party with some of their classmates from Brown and bumped into Mitchell. Madeleine and Leonard fought and Leonard told Madeleine that he wanted a divorce, before disappearing.

“The Bachelorette’s Survival Kit” took place in New York and Madeleine’s parents’ home. After Leonard disappeared, Madeleine returned to the party and Mitchell took her home. Mitchell began living with the Hanna family. They discovered that Leonard was living in a remote cabin in his home state of Oregon. Madeleine’s parents suggested that she should annul their marriage. Madeleine and Mitchell had sex. Mitchell realized that Madeleine did not really care for him romantically and that she had only slept with him as a way of moving on from Leonard. He asked her if there were any Victorian novels where the alternative suitor offered to get out of the heroine’s way so that she could get on with her life. He asked her if she thought that would be a good ending to a novel and she said yes.