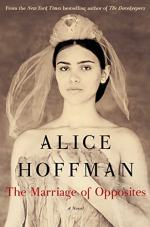 Related Topics
Alice Hoffman
Here on Earth
Incantation
Practical Magic
The River King
The Museum of Extraordinary Things
The Dovekeepers
Faithful: A Novel
The Rules of Magic
The World That We Knew
The Book of Magic

Alice Hoffman
This Study Guide consists of approximately 35 pages of chapter summaries, quotes, character analysis, themes, and more - everything you need to sharpen your knowledge of The Marriage of Opposites.

The Marriage of Opposites Summary & Study Guide includes comprehensive information and analysis to help you understand the book. This study guide contains the following sections:

This detailed literature summary also contains Quotes and a Free Quiz on The Marriage of Opposites by Alice Hoffman.

“The Marriage of Opposites” is a historical romance novel by Alice Hoffman which recounts the life of Rachel Pissarro, and the early years of her son, future Impressionist painter Camille Pissarro. When the novel begins in 1807 on Saint Thomas, Rachel is a girl of 12. She is rebellious, enjoys breaking rules, and wants to live her life the way she chooses. Her mother is strict and dutiful, knowing that both reality and social convention will not allow for this. Nevertheless, Rachel and her best friend, Jestine, a part-black daughter of the cook, are taught to read and educated by Rachel’s father. Rachel’s father is a little more relaxed about duty and convention than his wife. However, when Rachel reaches her early twenties, her father arranges a marriage with a businessman, father, and widower twice her age. The two companies will merge through the marriage. Isaac, the husband-to-be, does not want to force Rachel into the marriage. He allows her to meet his children and get to know him before she decides to marry him. She is enamored with his kindness, loves his children, and recognizes she has a duty to her father.

Although the marriage is loveless, the marriage is safe, secure, and comforting to Rachel who bears Isaac several children. Though she becomes very close to him, the marriage never translates into love. A few years later, Rachel’s father dies. At the same time, Jestine falls in love with Aaron, a distant cousin of Rachel’s who was taken on years before as the ward of her father. The two wish to marry, but because Jestine is partially black, this is forbidden. Aaron is sent to Paris to manage the company’s affairs there in order to get him away from Jestine. Jestine, however, is pregnant by Aaron and gives birth to a baby girl named Lydia who can pass for being white. On a visit from France, Aaron and his new wife, Elise, unable to have children, forcibly take Lydia with them. Jestine is devastated.

Seven years after marrying Rachel, Isaac dies of a heart attack. Rachel becomes the de facto head of the family company. For the first time in her life, she is truly free, but suddenly has numerous children to care for and little money to do it. The freedom she now enjoys also means she inherits great responsibility. Isaac’s nephew, Frederic, arrives from Paris to handle the company. Rachel is annoyed and believes Frederic intends to steal the company away, but Frederic convinces her this is not the case. The two quickly develop feelings for one another, though Frederic is 22 and Rachel is 30. They seek marriage, but are denied by the Jewish community on the island because they are legal relatives. They appeal the decision to the Grand Rabbi of Denmark, who upholds the marriage request. However, Rachel and Frederic are shunned by the Jewish community on Saint Thomas for years. During this time, they have several children, including Camille.

As Camille grows, he is less inclined to handle the family business than to draw and paint. Rachel encourages him to do his duty to the family, and to keep his mind focused on reality. Camille refuses, focusing on painting. He is finally allowed to go away to study in Paris, during which time he tracks down Lydia for Jestine, which begins a correspondence between them. Camille returns home to Saint Thomas, restless, and aspires to continue traveling and painting. Rachel opposes this but again relents. Ultimately, Rachel and Jestine decide to travel to Paris. There, one of Rachel’s daughters is dying of illness, while Jestine is reunited with Lydia. Camille and Frederic also come to visit in Paris. Frederic dies soon after of illness and exhaustion from work.

Camille quickly falls in love with Julie, a young Catholic farm girl his mother has taken on as a maid. Julie is eight years younger than Camille. Rachel opposes Camille’s desire to marry Julie since Julie is not of the faith. Camille thinks his mother is being hypocritical by denying him marriage after she had to fight for her own, and after she supported the right of Aaron and Jestine to marry years before. Rachel refuses to allow the marriage for years, during which time Camille and Julie begin having children. Only when falling in love with her grandchildren does Rachel finally consent to the marriage.

More summaries and resources for teaching or studying The Marriage of Opposites.

The Marriage of Opposites from BookRags. (c)2022 BookRags, Inc. All rights reserved.