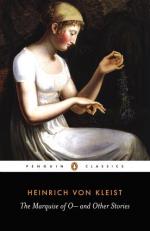 Plot Summary
+Chapters Summary and Analysis
Marquise of O-
The Earthquake in Chile
The Foundling
Free Quiz
Characters
Objects/Places
Themes
Style
Quotes
Topics for Discussion
Order our The Marquise of O, and Other Stories Study Guide

The Marquise of O, and Other Stories Summary & Study Guide

Heinrich von Kleist
This Study Guide consists of approximately 24 pages of chapter summaries, quotes, character analysis, themes, and more - everything you need to sharpen your knowledge of The Marquise of O, and Other Stories.

The Marquise of O, and Other Stories Summary & Study Guide Description

The Marquise of O, and Other Stories Summary & Study Guide includes comprehensive information and analysis to help you understand the book. This study guide contains the following sections:

This detailed literature summary also contains Topics for Discussion and a Free Quiz on The Marquise of O, and Other Stories by Heinrich von Kleist.

The Marquise of O- by Heinrich von Kleist is an anthology of three short stories by the German author. These dark stories explore the themes of human depravity as well as the wrath of man's judgment. The stories The Marquise of O- and The Earthquake in Chile both record the hardships two women undergo when they find themselves pregnant out of wedlock. The final story, The Foundling, is a chilling tale that describes how a much loved foster child comes to destroy both himself and his foster parents through his lust and desire for revenge.

The Marquise of O-, the longest of the three short stories included in this book, is a tale of deceit and the measure to which a person might go to repair their misdeed. The Marquise is raped, apparently unbeknownst to her, by a Russian count. The count proposes marriage to her in an attempt to cover up his misdeed. However, the Marquise discovers she is pregnant before the marriage can be arranged. The Marquise prints an ad in the local paper asking the father of her baby to come forward so they can be married. She is shocked when the count is the one who comes forward. The two are married and live separately the first year of their married life. After the baby is born the count gives the baby a large sum of money as a gift. He also signs his estate to his wife upon the day of his death. The two begin to correspond with each other and soon fall in true love.

The Earthquake in Chile is a tragedy in which a young couple sentenced to death because they conceived a child before marriage is saved from their fates by a great earthquake that destroys the city of Santiago. Although they are not killed by the earthquake the couple is later recognized by zealous church goers and killed in the street. Their infant son is later adopted by Don Fernando, whose own son is also killed by the angry crowd. This short story raises questions about the judgments of God as well as the hypocrisy found in the hearts of most people.

The third story The Foundling tells the tale of a young orphan boy who is adopted by a man and woman whose own son's death resulted from the boy's behavior. Although the couple treats him kindly the boy, Nicolo, grows to become a bigot and liar. Nicolo tries to seduce his foster mother in an attempt to destroy her reputation but only succeeds in killing her. He then orders his father away from the house his father willed to him. As a result of the evil in their hearts, the law sides with Nicolo and his father is told to stay away from him. The father, however, returns to his home one last time and kills Nicolo. As a result, he is sentenced to death but will not take absolution because he wants to go to hell and torment Nicolo further.

More summaries and resources for teaching or studying The Marquise of O, and Other Stories.

The Marquise of O, and Other Stories from BookRags. (c)2022 BookRags, Inc. All rights reserved.