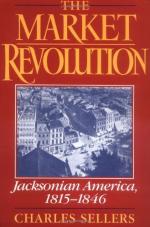 This detailed literature summary also contains Topics for Discussion and a Free Quiz on The Market Revolution: Jacksonian America, 1815-1846 by Charles Sellers.

Distinguished American historian Charles Sellers advances a novel thesis about the period in American history he refers to as "Jacksonian America," which extends from 1815 to 1846. Following the War of 1812, an economic boom begins a "market revolution" that pervades social, political, cultural and religious life in the United States. This lengthy book gives an extensive history of the period, from the political machinations of the major political parties and their leaders, to new religious, spiritual and denominational movements, to economic analyses of historical developments.

Sellers covers a wide range of events, from the conflict with the First Bank of the United States to Jackson's successful dechartering of the Second Bank of the United States, from the War of 1812 to the Mexican-American War and from the Jefferson Administration through the Polk Administration. He also discusses the development of several religious movements, including antinomianism, arminianism, the "New Light," the "Moderate Light" and the "Newest Light" churches and their leaders.

The most significant thesis of the book, however, is that the rising forces of liberal capitalism do not manifest themselves in the rise of democratic political institutions. Rather, Sellers argues, democratic government replaces constitutional republican government as a reaction to the total social revolution brought about by early 19th century capitalism. Andrew Jackson rides a groundswell of radical democratic sentiment that aims to restrain corporate power, reduce the power of the big banks, preserve free trade, extend the vote and reduce corruption in government all the way to the White House.

Northern manufacturing interests often co-opt the early 19th century American government to fund their pet projects and extend subsidies and loans to their businesses. Forces around the country arise to stop them and other regional elites, such as planter elites in the South and the cultural and religious "Moderate Light" elites in New England. In the end, Sellers argues, the forces of democracy and capitalism balance one another out. These two ideas are in ideological conflict which is why Sellers sees the United States' political institutions as rooted in a fundamental contradiction. The point of the book is to show how this historical contradiction arises and how the tension between the two ideas gives rise to many important events in American history.

The reader should be aware that Sellers's historiography is fundamentally Marxian, in that it follows Karl Marx and related thinkers by seeing history as fundamentally driven by material rather than ideological forces, especially economic ones. Further, it understands history as the development of new forms of economic life and their unraveling through their internal contradictions and tensions. This unraveling produces periods of historical and institutional revolution. In true Marxian fashion, Sellers expresses a strong bias in favor of the working classes and routinely rejects the values of the rich and middle-class. Finally, again following Marxian historiography, all religious developments are seen as resulting from economic and real-world anxiety.