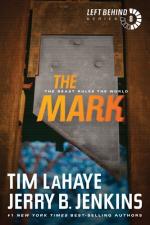 The Mark: The Beast Rules the World Summary & Study Guide

Tim LaHaye
This Study Guide consists of approximately 39 pages of chapter summaries, quotes, character analysis, themes, and more - everything you need to sharpen your knowledge of The Mark.

The Mark: The Beast Rules the World Summary & Study Guide includes comprehensive information and analysis to help you understand the book. This study guide contains the following sections:

This detailed literature summary also contains Topics for Discussion and a Free Quiz on The Mark: The Beast Rules the World by Tim LaHaye.

The Mark: The Beast Rules the World is the story of Nicolae Carpathia's attempt to rule the entire planet and the resistance led by a few who believe in Christ. The book begins with a speech by Carpathia, pledging that he will not tolerate those who have called him the Antichrist. David Hassid is one of the Christians, and the first chapter begins with David searching for his fiancée, Annie. He will later discover that Annie was killed by lightening called down from the sky by Carpathia's false prophet, Leon Fortunato. David works in the corporation that governs the entire planet, the Global Community. Carpathia runs the organization and has not yet discovered that there are a few within the organization who are Christians.

Christians of the time can recognize each other by the mark of Christ on the forehead. Non-believers don't see the mark. The small group of believers who have formed to fight the Antichrist and to lead as many people to Christ as possible are called the Tribulation Force. The group is comprised of Rayford Steele, his daughter Chloe, Chloe's husband Buck, Tsion Ben Judah who is a teacher and orator, Dr. Chaim Rosenzweig who is destined to be a leader, David and several others. The bulk of the group live in Chicago where false rumors of radiation poisoning mean that few people venture into the area.

The book takes up shortly after Rosenzweig has killed Carpathia. As was written in the prophecies of Revelations, Carpathia rose from the dead after the third day and is now indwelt by Satan himself.

While the believers know that there's no way to fully stop Carpathia - the details are already written in the Bible - they spend their time trying to reach as many lost people as possible and to bring them to Christ. The Mark is one of a series of books and in this particular edition, Carpathia has decided to have everyone swear their allegiance to him by accepting the "mark" described in Revelations. The mark is a biochip installed under the skin and a tattoo of three numbers that identify that person's home. The Christians know that accepting the mark means a life of eternal damnation. The non-believers know that they will be beheaded if they don't accept the mark. Despite the immediate retribution, there are some believers who refuse the mark.

Carpathia has many followers - people who pledge their full allegiance and rush to receive the mark. He is also a tyrant, ruling with an iron fist though few people see that side of him. He plans to do everything in his power to destroy the religions of the world. He calls for the arrest of Christians who meet secretly, calls them political prisoners and has many executed.

From his place in GC, David manages to help those with the Tribulation Force by assigning them new "orders" that allow them to travel, posing as members of the Peacekeepers - a military force that is part of Carpathia's plan. As the time draws near for David and other GC employees to receive the mark, David and the others concoct a plan to fake their deaths without having received the mark. They then plan to join the rest of the Tribulation Force.

The members have among their ranks, Zeke, a young man who seems rather slow mentally but who has a knack for computers. He manages to create new identities for anyone who needs to travel. A new member, Hattie Durham, has denied efforts to convert her to Christianity throughout the period of the Tribulation but now has accepted Christ. Hattie is absolutely bubbling over with the spirit and hurries to tell anyone who'll listen about her experience.

The story is set during a time the Bible describes as the Tribulation. The first event during the Tribulation was the "taking up" of all believers. The people left are now fighting to save as many as possible. The book takes place forty-two months into the Tribulation with three and a half years left to go before the return of Christ. This particular story ends just as Chaim Rosenzweig is preparing to become a "modern day Moses" to lead the Christians to a safe place - the city of Petra.

More summaries and resources for teaching or studying The Mark: The Beast Rules the World.

The Mark: The Beast Rules the World from BookRags. (c)2022 BookRags, Inc. All rights reserved.