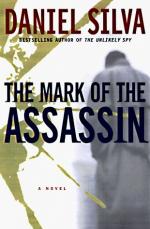 The Mark of the Assassin Summary & Study Guide

The Mark of the Assassin Summary & Study Guide Description

The Mark of the Assassin Summary & Study Guide includes comprehensive information and analysis to help you understand the book. This study guide contains the following sections:

This detailed literature summary also contains Topics for Discussion and a Free Quiz on The Mark of the Assassin by Daniel Silva (novelist).

Throughout history, politically aware individuals have, at one time or another, contemplated the existence of secret international organizations, comprised of the most wealthy and powerful, which seek to control political, social and economic structures and events. Others have seen smaller conspiracies, following major events, such as presidential assassinations or financial meltdowns. Daniel Silva uses this human tendency to craft a novel which weaves both national politics and international conspiracy into a tale of power, control, greed and intrigue. Michael Osbourne, CIA operative, in investigating a purported Arab terrorist attack on a U.S. airline, is chilled by the method in which the perpetrator has also been assassinated - three shots to the face. Michael is convinced that the assassin is a professional whose identity has never been revealed, but with whom he has a past. This particular assassin, code name "October," is in fact a former KGB operative who is now working as a free agent, following the breakup of the Soviet Union. Michael sets out to pursue this assassin, convinced that the airline attack is not the work of Arab terrorists but, rather, part of an international conspiracy, and that "October" has been contracted to clean up the loose ends by assassinating those who have knowledge of it.

The initial missile attack is actually the work of a secret society of international "players," whose goal is to maintain world tension and to enrich themselves in the process. The major U.S. member is Mitchell Elliott, a defense contractor who is able to use the attack to ensure the re-election of President James Beckwith, a man he can control through associates, White House Chief of Staff Paul Vandenberg and prominent D.C. attorney Sam Braxton. When investigative reporter Susanna Dayton gets too close to the collusion between Mitchell and these associates, she is killed. As well, the Society must order the murder of Michael Osbourne, who is getting to close to the larger conspiracy, as he pursues his old nemesis across Europe to Egypt. Michael and the assassin, "October," finally confront one another, though neither is killed. Michael retires from the CIA, and October escapes to an anonymous life in Greece. The larger conspiracy is not revealed, despite Michael's report to his superior Monica Tyler, who is romantically involved with Mitchell Elliott, and the culprits are not brought to justice. Within the United States, however, Mitchell Elliott has lost his defense contract, Sam Braxton his bid for a cabinet post, and Chief of Staff Vandenberg is dead.

The Mark of the Assassin from BookRags. (c)2022 BookRags, Inc. All rights reserved.