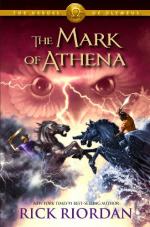 The Mark of Athena Summary & Study Guide includes comprehensive information and analysis to help you understand the book. This study guide contains the following sections:

This detailed literature summary also contains Quotes and a Free Quiz on The Mark of Athena by Rick Riordan.

Mark of Athena opens with Annabeth travelling to Camp Jupiter. Camp Jupiter is similar to Camp Half-Blood except the residents are descendants of Roman gods and not Greek ones. Annabeth is travelling with several other campers, including Leo Valdez, Gleeson Hedge, Jason Grace, and Piper Mclean. She’s on guard around Jason because she doesn’t trust him, finding him to be too perfect. The group arrives at the camp, seeing that it had recently been attacked. Before their ship can land the Roman god of boundaries, Terminus, arrives on the ship and insists that they all disarm before being allowed to enter the camp. An agreement is finally reached and Annabeth is finally allowed in.

Annabeth runs into Percy and Reyna. She instantly embraces Percy before they are all dragged off to a feast. At the feast, both camps discuss the Prophecy of Seven, with Annabeth trying to convince Camp Jupiter that it means both Greeks and Romans need to work together in order to close the Doors of Death. Unfortunately for them, the Augur of Camp Jupiter, Octavian, doesn’t trust them. Leo takes Octavian aboard their ship, the Argo II, in an attempt to get him to start trusting the Greeks. At the same time, Reyna privately talks with Annabeth, telling her that she believes the Romans and Greeks should work together.

During their conversation, the Argo II suddenly opens fire on the city. A mob starts to form, rioting against the Greeks, but Percy is able to hold them at bay. Octavian returns from the ship, claiming that Leo is the one who initiated the attack. The group manages to flee onto the ship before it is brought down, with Annabeth taking Percy, Hazel, and Frank with them as well. Once they escape, they question why Leo attacked. Leo claims he has no idea why he did it, and doesn’t actually have any memories of the attack itself.

Piper takes care of Jason, who was injured during the escape. While tending to him, she has a vision and sees a number of unsettling images, including a man in purple next to a Topeka road sign. The group decides to travel to Topeka to speak with Bacchus. Bacchus is none too pleased to see them, but Piper tells him about her vision. This calms him down somewhat, but he tells them he doesn’t want to be part of their quest, as he no longer considers himself a demigod. He does give them information, telling them to seek out Phorcys for information on Gaea.

Bacchus leaves and Gaea attacks the group, using two Eidolons to get control of Jason and Percy. She tells Piper that she only needs a boy and a girl demigod, forcing Piper to choose whether Jason or Percy should live. Piper can’t decide, so Percy and Jason are forced to fight. Piper manages to interfere before they can kill each other and manages to knock both of them unconscious. The group retreats on the Argo II where Percy and Jason awaken without any signs of possession.

The group comes to the conclusion that Gaea must have used the same control on Leo to get him to attack Camp Jupiter, but they have no evidence to show to Octavian and the other Romans. Instead, they decide to follow Bacchus’s advice and search for Phorycs. Piper realizes the Eidolons are still on the ship, but she manages to outsmart them and get them to swear never to possess a member of the Argo II again.

That night, Percy has a dream that Otis and Ephialtes are preparing to destroy Rome at the start of July. In his dream he also sees Nico di Angelo trapped in a jar. Percy tries to reach out to him, but Nico is in a meditative trance and doesn’t hear him. Percy vows that he will save Nico before being woken by Annabeth. Afterwards, the group arrives in Atlanta to begin their search for Phorcys. With the help of Keto, the mother of sea monsters, the group is able to find Phorcys in an aquarium.

Percy gets Phorcys to talk about Ephialtes and Otis and also gets him to talk about a prisoner, Nico, which they were using as bait for the group. Phorcys tries to trap the group in the aquarium, but they manage to escape. Percy informs everyone that they need to find a map that leads to the Athena Parthenos in Rome. Annabeth reveals that she saw Athena several months ago looking at a map. When she tried to talk with her, all she said was she had to follow the mark of Athena. She then gave her a silver coin and warned her that if she worked with the Romans she would be no child of hers.

With the aid of Aphrodite, the group is able to find out that the map is hidden away at Fort Sumter. On their way to the fort, they are attacked by Octavian who still believes them to be responsible for the attack on Camp Jupiter. They manage to slow the Romans down and split up to find the map. Annabeth has to overcome her fear of spiders, but manages to get the map. Reyna confronts Annabeth before she can get away with the map, saying that she has to come back to Camp Jupiter to stand trial. Annabeth convinces Reyna to let her go so she can repair things between the Camps. Reyna reluctantly agrees, warning Annabeth if she doesn’t they will next meet as enemies. She leaves and rejoins the others, sailing out to the Mediterranean Sea to save Nico and find Athena Parthenos.

The group finally gets to Rome where Percy has a vision about Gaea destroying Camp Half-Blood. She offers to spare the Camp if Percy surrenders himself and Annabeth. He refuses and wakes up. Annabeth uses her map which leads her on a series of trials she has to overcome. The rest of the group splits up with the intent to rescue Nico. The group eventually manages to find and rescue Nico, but Annabeth isn’t so lucky in her own trials, ultimately being captured by the spider creature, Arachne. Percy and the others arrive to save Annabeth, but she and Percy end up falling into Tartarus together. The book ends with the rest of the group setting sail for Greece so they can break into Tartarus and rescue Percy and Annabeth.