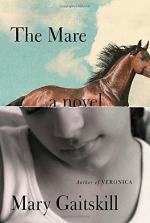 Get The Mare from Amazon.com
View the Study Pack
Study Guide
Order our The Mare Study Guide

Mary Gaitskill
This Study Guide consists of approximately 134 pages of chapter summaries, quotes, character analysis, themes, and more - everything you need to sharpen your knowledge of The Mare.

The Mare Summary & Study Guide includes comprehensive information and analysis to help you understand the book. This study guide contains the following sections:

This detailed literature summary also contains Quotes and a Free Quiz on The Mare by Mary Gaitskill.

NOTE: The following version of the novel was used to create this study guide: Gaitskill, Mary. The Mare. Vintage, November 3, 2015. Kindle.

Abused and hungry for love, Velvet Vargas befriended an abused and angry horse in the novel The Mare by Mary Gaitskill. Velvet had lived her life with her mother telling her that she was ugly and worthless but while participating in the Fresh Air program, it was discovered that Velvet had a natural talent for riding horses. In a short span of only three years Velvet became a good enough rider that she was able to compete even though her mother forbade her from doing so. Velvet’s success in the competition proved to her that regardless of what her mother said, Velvet was not ugly or worthless.

Velvet first met Ginger and Paul Roberts when she was 11 years old. Because they lived next door to a riding stable, Velvet was offered lessons in exchange for helping out around the barn. During her first visit to the barn, Velvet was fascinated by a horse that seemed angry. A sign over her stall warned people not to go near her. Velvet could not help but walk up to the bars of the stall. When she offered her hand, the horse touched it.

Even though her visit with the Fresh Air program was supposed to last only two weeks, Velvet continued to visit with Ginger and Paul over the course of the next three years. Childless Ginger connected Velvet with her sister, Melinda, a girl whom Ginger felt had never had a good chance at life. Even though she tried to help her sister while she was still alive, Ginger felt she had failed. Helping Velvet seemed to be a way for her to try to redeem herself for not treating her sister better. For this reason Ginger continued to insist that Velvet come and visit even though Paul did not completely approve of the arrangement.

The action of the story culminates with Velvet’s invitation to ride in a hunter/jumper competition. Velvet disobeyed her mother’s request for her not to ride in the show and instead forged her mother’s name on the permission slip. When Velvet’s mother learned that she was going to ride, she sent Velvet a message telling her not to come home if she did compete. Wanting to prove to herself that she could win the competition, Velvet did ride. Her mother changed her mind at the last minute and attended the competition. She was both angry with her daughter for disobeying her and proud of her performance.

After Velvet finished the competition, her mother confronted her. Even though she was rough with her daughter and criticized her for disobeying her, she also recognized that Velvet had made her proud. As a result of her disobedience, however, Velvet’s mother would not allow her to visit Ginger, Paul and the horses again. In the end of the novel, Velvet promised herself that even if she had to wait until she was 18, she would see her horse again.

More summaries and resources for teaching or studying The Mare.

The Mare from BookRags. (c)2022 BookRags, Inc. All rights reserved.