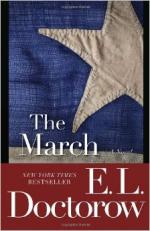 The March: A Novel Setting & Symbolism

Fieldstone is the Georgia plantation of John and Mattie Jameson where Pearl and others work as slaves until the Civil War freesthem.

Milledgeville Penitentiary is the prison from which Arly and Will are freed in exchange for joining the Confederate Army.

When she finds Lt. Clarke's dead body, Pearl removes a letter from his hand and pledges to deliver it to his family in New York City.

Before leaving Fieldstone, Pearl receives two gold coins from a fellow slave; she later uses one to purchase a donkey and the other to help her former owners return home and start a new life.

Savannah is a city on the Georgia coast where several of the freed slaves get their first glimpse of life off the plantation.

Photography is a new phenomenon at the time of the...