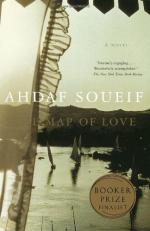 Ahdaf Soueif
This Study Guide consists of approximately 80 pages of chapter summaries, quotes, character analysis, themes, and more - everything you need to sharpen your knowledge of The Map of Love.

The Map of Love Summary & Study Guide includes comprehensive information and analysis to help you understand the book. This study guide contains the following sections:

This detailed literature summary also contains Topics for Discussion and a Free Quiz on The Map of Love by Ahdaf Soueif.

The Map of Love tells the story of an artistic and articulate Englishwoman, Anna, who visits Egypt as a balm for the wounds of widowhood. Egypt is a land she has heard much about and whose sights she has admired in museum paintings. Anna is too adventurous to be content with the staid tourism of the late 19th Century, and dresses in men's clothing to see the Pyramids and Mt. Sinai. On the latter trip, allies of a political protester recently jailed kidnap her. The wife of the protester, Layla, and Layla's attorney brother, Sharif, to whose home Anna is taken, are indignant for her sake, befriend her, and Sharif vows to help Anna reach her original goal.

In the desert of Sinai, where Anna dresses as an Arab man, and particularly in the garden at St. Catherine's Monastery, where Anna is an Arab woman, she and Sharif develop deep feelings for each other. He is silent upon their return, and Anna resolves to return to England. Layla points out her brother's mistake and he proposes marriage. They set aside the many problems this will create for each - Anna will be shunned by fellow Britons in Egypt, and Sharif will be suspected of British bias by his numerous political enemies -marry, and move into the old house with Sharif's mother Zeinab and hermitic father al-Baroudi, twenty years ago a rebel against the British.

Anna assimilates to Egyptian culture, learns Arabic, and is drawn into the nationalist movement as translator, intermediary with anti-colonialists in London, and finally spokesperson with foreign visitors. Sharif works hard to fight the British Occupation legally and legislatively. They have a daughter, Nur al-Hayyah - literally the light of their lives - and, ten years after their marriage, Sharif begins thinking about retiring to private life. He is thinking of this when unknown assailants open fire on his carriage. Sharif dies and Anna keeps her promise to take Nur to England. Contact is lost with her Egyptian in-laws.

This story emerges from research performed by Amal from a trunk load of journals and letters discovered in New York City by an American, Isabel Parkman. At a party she mentions the find to a prominent older musician, which is sent to his sister, Amal, in Cairo. Amal becomes engrossed in the characters, and Isabel falls in love with Amal's sister 'Omar. The anti-terrorist, anti-Islamist policies of Egypt's President Mubarak cause problems on the family lands, and revive Amal's late-1960s radicalism. 'Omar is deeply involved in Palestinian politics. Only after making love with Isabel does 'Omar realize he was her mother's lover in 1961 and thus could be her father. They have a son, Sharif.

Part of the treasures in the trunk is one panel of a tapestry depicting Isis, Osiris, and Horus, ancient Egyptian deities. Anna finishes weaving the panels just before Sharif is assassinated. One panel goes to Anna and Nur, and thus into Isabel's trunk. A second goes to Layla and reaches 'Omar through his and Amal's father, Ahmad. A third panel is never accounted for. Isabel discovers it in her camera bag when she returns to Cairo after a long visit to the U.S. She claims it was put there by a mysterious woman, Umm Aya, whom she claims to have met in al-Baroudi's old cell. Conservators of the museum that once was Anna and Sharif's old house deny anyone could have gotten inside the cell and any knowledge of an Umm Aya. Amal cannot accept Isabel's explanation, but finds no other.

More summaries and resources for teaching or studying The Map of Love.

The Map of Love from BookRags. (c)2022 BookRags, Inc. All rights reserved.