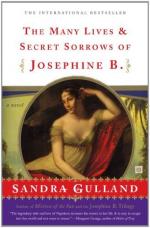 The Many Lives & Secret Sorrows of Josephine B Summary & Study Guide

Sandra Gulland
This Study Guide consists of approximately 34 pages of chapter summaries, quotes, character analysis, themes, and more - everything you need to sharpen your knowledge of The Many Lives & Secret Sorrows of Josephine B.

The Many Lives & Secret Sorrows of Josephine B Summary & Study Guide includes comprehensive information and analysis to help you understand the book. This study guide contains the following sections:

This detailed literature summary also contains Topics for Discussion and a Free Quiz on The Many Lives & Secret Sorrows of Josephine B by Sandra Gulland.

Rose is given a gift of a book to be used as her diary on her fourteenth birthday. She despairs because she is not yet betrothed and the family's financial situation makes it unlikely that she will become so. The island of Montinico where Rose's family lives is a haven for voodoo and Rose, consulting a fortune teller, learns that she is to marry unhappily and to become queen. Rose is punished for seeking the fortune teller and her sister Catherine later seeks out the same old woman who tells Catherine that she will die before her next birthday. The girls return to school but are soon sent home because Catherine is ill. She dies as predicted.

Soon after Catherine's death, Rose's aunt Desiree sends word that the son of a French Marquis, a boy named Alexandre, wants to marry Catherine. Rose's father, Joseph, sends word of Catherine's death and proposes Rose's name instead. Alexandre's father agrees that his son will marry one of Joseph's daughters—Rose or Manette—and leaves the choice of which up to Joseph. Rose's mother, Claire, cannot bear the thought of sending the youngest daughter, Manette, and Rose makes the trip. Alexandre is handsome and sought after, and soon agrees that he will marry Rose. The couple have a son, Eugene, followed soon after by a daughter, Hortense. Alexandre's infidelities drive a wedge between the couple and he soon orders Rose out of his house so that she is living in a convent. Alexandre eventually relents and Rose is able to live where she chooses though she does not live with Alexandre.

Alexandre and his brother, Francois, are soon embroiled in the politics of the day and Alexandre is promoted quickly while Francois is forced to leave the country after a failed attempt to rescue the King. With that defection, Rose knows that the entire family is being scrutinized. Alexandre is later arrested and Rose is arrested soon after. The guillotine is put to constant use and many are beheaded. Rose's time in prison is filled with dread of having her name called on the next list to be summarily tried and beheaded. Alexandre begins an affair in prison and Rose, tired of the situation, soon finds comfort in the arms of another military man, Lazare Hoche. Lazare's name is called and he is believed dead, though he later emerges and says that he was held in a dungeon and never taken for trial. Alexandre is soon beheaded and Rose's name is called, though she is too ill to stand trial and escapes death until the time comes when many—including Rose—are released.

Rose begins life without any real means of support, borrows from some and even briefly goes into a profiteering scheme in order to support herself and her family. During this time she faces near poverty conditions while trying to keep up appearances and maintaining a home for her children. It is in this situation that she meets Napoleone Buonaparte though a mutual acquaintance, Deputy Barras, who is important in the new government of France. Barras tells Rose that Napoleone will go far in his career and urges that she marry him while telling Napoleone that marrying Rose will gain him an appointment as head of the Army of Italy. Rose finally gives in to the marriage but comes to question the motives of both herself and Napoleone until he professes his love for her and urges her to look inside herself at the woman she is destined to be.

More summaries and resources for teaching or studying The Many Lives & Secret Sorrows of Josephine B.

The Many Lives & Secret Sorrows of Josephine B from BookRags. (c)2022 BookRags, Inc. All rights reserved.