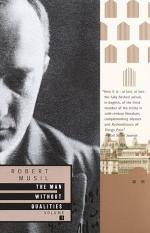 The Man Without Qualities Topics for Discussion

Robert Musil
This Study Guide consists of approximately 47 pages of chapter summaries, quotes, character analysis, themes, and more - everything you need to sharpen your knowledge of The Man Without Qualities.

Explain how Musil is and is not a German literary figure.

What were the main affects of the Nazi Party's rise to power and time in power on the author Musil's life - with respect to his work as an author.

Musil lived from 1880 - 1942. Do you think the fact that he was born in the 19th century but spent most of his life in the 20th century can be characterized? Defend your answer.

What is Universal Austrianism?

Describe briefly how Prussia, Austria and Germany are characterized.

Like or dislike Herr Arnheim based upon your own judgment of how his character is presented in this novel.

Give an opinion regarding how Musil, like Dostoevsky presents cases of women who have extramarital affairs and also presents advocation of the women's movement in this novel.

Is the target audience for this novel female, male or both...

More summaries and resources for teaching or studying The Man Without Qualities.

The Man Without Qualities from BookRags. (c)2023 BookRags, Inc. All rights reserved.