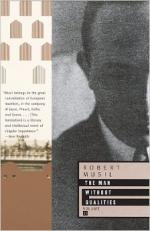 The Man Without Qualities II: The Like of It Now Happens Quotes

Robert Musil
This Study Guide consists of approximately 54 pages of chapter summaries, quotes, character analysis, themes, and more - everything you need to sharpen your knowledge of The Man Without Qualities II.

"In all this hustle and bustle it was long before Ulrich found time to keep the promise he had given Director Fischel and visit him and his family," (p. 3). Chapter 73 [the first chapter of volume 2]

"The contradiction embodied in the fact that her parents, although they were generally strongly impressed by everything that was said by many people, in this case made a peculiar exception, had early imprinted itself on her mind," (p. 9). Chapter 73

"Diotima showed herself mollified, even if she never was so completely in his presence, and deigned to give the General some information about what had been going on since the last committee-meeting," (p. 19). Chapter 75

"Incidentally, he had marveled a little bit at the invitation. The fact that it had come after all had surprised him," (p. 44). Chapter 80

More summaries and resources for teaching or studying The Man Without Qualities II: The Like of It Now Happens.

The Man Without Qualities II: The Like of It Now Happens from BookRags. (c)2020 BookRags, Inc. All rights reserved.