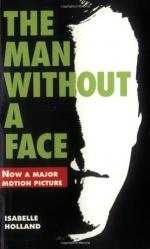 The Man Without a Face Topics for Discussion

Isabelle Holland
This Study Guide consists of approximately 28 pages of chapter summaries, quotes, character analysis, themes, and more - everything you need to sharpen your knowledge of The Man Without a Face.

Why did Charles' mother consider Charles' father as her "one big mistake?" How did this attitude impact Charles?

Why did Charles' mother marry so often? How did it impact her children?

Was McLeod hiding more from his past or from his disfigurement? Why?

Why did the reclusive McLeod agree to tutor Charles? How was McLeod different than Charles thought he would be?

Although it's not fully explained, what relationship might McLeod have had with the boy who burned in the car accident? What emotional connection did McLeod possibly make between Charles and the dead boy?

How does the author portray the intimacy that occurred between McLeod and Charles? What is your opinion of the incident? Why can it be dangerous for an older person to...

More summaries and resources for teaching or studying The Man Without a Face.

The Man Without a Face from BookRags. (c)2023 BookRags, Inc. All rights reserved.