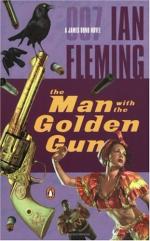 The Man with the Golden Gun Summary & Study Guide

Ian Fleming
This Study Guide consists of approximately 38 pages of chapter summaries, quotes, character analysis, themes, and more - everything you need to sharpen your knowledge of The Man with the Golden Gun.

The Man with the Golden Gun Summary & Study Guide Description

The Man with the Golden Gun Summary & Study Guide includes comprehensive information and analysis to help you understand the book. This study guide contains the following sections:

This detailed literature summary also contains Topics for Discussion and a Free Quiz on The Man with the Golden Gun by Ian Fleming.

This book is described on the cover and on its liner as "the last James Bond novel that [his creator] the late Ian Fleming wrote". A fast-paced, suspenseful novel of action, violence, suspense, and unexpected metaphoric depth, it tells the tale of an intensely personal confrontation between British secret agent James Bond and the internationally notorious assassin Scaramanga. Themes relating to the nature of murder and to the multi-faceted mirror imageries of life thread through its tersely written narrative.

The novel begins with a two-chapter prologue in which British secret agent James Bond, believed by his superiors to have been killed while on assignment, returns to London. As those superiors question Bond's identity and the motivations behind his return, narration indicates that Bond's thought processes have been altered by enemy Russian agents for purposes that are at first unknown but soon become clear when Bond attempts to assassinate the head of the British Secret Service. The attempt is foiled and Bond is rehabilitated, sent almost immediately on another mission that should, in the mind of his boss, prove his loyalty once and for all.

That mission leads Bond to Jamaica, where he picks up the trail of the internationally feared assassin-for-hire Scaramanga, and where he is also unexpectedly and happily reunited with his former secretary, Mary Goodnight. Goodnight supplies him with the information and resources he needs to track Scaramanga, whom Bond soon confronts in a brothel run by the spirited Tiffy. Bond convinces Scaramanga that he is not a police officer, but rather a specialist helping a plantation owner who's having trouble with security around his estate. Scaramanga hires Bond to provide security on his own establishment, The Thunderbird Hotel, during an important business meeting.

Upon arrival at the hotel, Bond quickly comes to understand that it is a front for a startling collection of illegal activities—industrial sabotage, drug dealing, money laundering, and more. Scaramanga demands that Bond assist in making the arrangements for the meeting, which Scaramanga claims is for investors in the hotel but which Bond soon understands is actually for a group of internationally connected gangsters.

As the meeting progresses, one of the gangsters disagrees with Scaramanga and is shot for it. Another is revealed to be an agent for the Russian KGB who knows about Bond's mission and who eventually becomes aware of Bond's true identity. Bond, with the help of Mary Goodnight, manages to keep that identity secret from Scaramanga, but not for long—soon, he and the other gangsters are making plans to end Bond's life. Their attempt takes place on a train ride to the other side of the island. On the ride, a shoot-out results in one of the gangsters being killed, Scaramanga and Bond both being wounded and jumping off the train in pursuit of each other, and the rest of the gangsters being killed by a bomb set on a bridge by Bond's CIA allies.

Bond pursues Scaramanga through the swampy morass, eventually coming across him as he's leaning up against a tree and eating a snake he'd just killed. When Bond steps out to confront him, Scaramanga pleads for a bit of time to make his peace with God. As he's praying, however, he stealthily reaches for his gun and fires at Bond, wounding him. Bond instantly fires back and kills his opponent. Later, while recovering in hospital, Bond receives word through Mary Goodnight that the superiors at the Secret Service are pleased with him and are offering him significant honors. Bond, however, realizes that a public life of honor and respect is not something he's interested in, and rejects the offer. He accepts, however, Mary Goodnight's offer to let him recuperate from his wounds and his adventures at her home.

More summaries and resources for teaching or studying The Man with the Golden Gun.

The Man with the Golden Gun from BookRags. (c)2022 BookRags, Inc. All rights reserved.