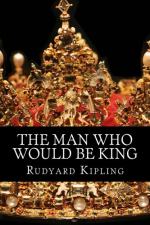 Related Topics
A Diversity of Creatures
Captains Courageous
France at War
From Sea to Sea and Other Sketches, Letters of Travel
If

The Man Who Would Be King Summary & Study Guide

Rudyard Kipling
This Study Guide consists of approximately 35 pages of chapter summaries, quotes, character analysis, themes, and more - everything you need to sharpen your knowledge of The Man Who Would Be King.

The Man Who Would Be King Summary & Study Guide Description

The Man Who Would Be King Summary & Study Guide includes comprehensive information and analysis to help you understand the book. This study guide contains the following sections:

This detailed literature summary also contains Quotes and a Free Quiz on The Man Who Would Be King by Rudyard Kipling.

The following version of this book was used to create the guide: Kipling, Rudyard. “The Man Who Would Be King.” Minerva Publishing, 2018.

An unnamed British narrator began this short story with a business trip from Ajmir to Mhow. Due to a shortage in the government’s budget, he was forced to ride Intermediate-class rather than First- or Second-class. Along the way, a large man entered the train car, and disclosed that he wanted to send a message to his friend: “‘He has gone South for the week’” (6). He asked the narrator to cut his trip short by two days to deliver it to a large, red-haired man, at Marwar Junction, and the narrator agreed.

The narrator spent eight days dining with “Princes and Politicals” in between scrounging for his other meals (8). On his return trip, he stopped in Marwar Junction and delivered the message to the red-haired man. He then decided to report the men’s whereabouts to officials and deport them for their safety. The narrator returned to the newspaper office where he usually worked. One of the slow, summer seasons, the paper began publishing on Saturday nights. One such night, the two men he met previously approached him. They introduced themselves as Brother Peachey Carnehan and Brother Daniel Dravot. They wanted to talk in the office as repayment for their deportation, and the narrator obliged.

Carnehan and Dravot planned to take Kafiristan in Afghanistan by aiding and then overtaking the preexisting kings. The narrator tried to discourage them, but the men pressed to read maps and books on the area. The narrator offered them a legitimate job recommendation, but they revealed their signed contract in which they promised to become kings of Kafiristan, avoid women and liquor, and work together. The men invited the narrator to the Kumharsen Serai the next day to see them off. Out of curiosity, the narrator went to the Serai and found Dravot disguised as a mad priest and Carnehan as his servant. They joined a caravan and travelled safely through India and into Afghanistan.

Two years later, the narrator was working late in the newspaper when a crippled man entered. He exclaimed that he was Peachey Carnehan back from Kafiristan, and he told his story of the past two years with Dravot. They turned off from the caravan, changed their disguises, killed their camels, and stole two mules. During a rest, they encountered two groups fighting one another, and they helped the smaller group to gain their trust. The natives took them back to their village, where Dravot only accepted offerings from priests to gain respect.

They protected the village and split up in search for others to impress, training men and forming a kingdom. When Dravot returned, he brought hundreds of followers along with two gold crowns adorned with precious stones (34). Dravot explained that the natives knew the Craft and affirmed he would be “a god and a Grand-Master” (35). Despite Peachey’s hesitation, the village transformed the temple of Imbra into a meeting space for Lodge.

One of the priests was skeptical of Dravot’s legitimacy after they faked the ritual. He overturned the stone serving as the Master’s chair and found the Master’s Mark matching the one sewn into Dravot’s apron. This solidified their god-like status, and they raised ten chiefs to the Third Degree with fake rituals. For the next six months, Dravot learned their language and consulted priests and chiefs, eventually sending Carnehan to trade for better artillery.

Dravot changed his goals from creating a dynasty to becoming an English knight and expanding the British Empire. He asked for a wife, which made the chiefs and priests suspicious of his god status. His anger blinded him, and the bride-to-be bit his neck, drawing blood, proving his manhood. Their army revolted with the weapons Dravot and Carnehan provided and trained them to use. Billy Fish and his men protected Dravot and Carnehan. Their path was eventually impeded by the natives, who captured Dravot and Carnehan and killed Billy Fish. Dravot was thrown off of a rope bridge, and Peachey was crucified. He survived the night, and they allowed him to travel home. He brought with him the head, crown, and hand of Daniel Dravot.

Peachey assured the narrator he would seek help from the Deputy Commissioner and left the office on foot. When the narrator left to visit the shops at high noon, he saw a crippled man walking and singing with his hat off. He took the man, who did not recognize him, into his carriage and to an asylum. When he called two days later to check on the man’s welfare, he was told he died the day before from sunstroke. The man did not have any belongings according to the superintendent.

More summaries and resources for teaching or studying The Man Who Would Be King.

The Man Who Would Be King from BookRags. (c)2022 BookRags, Inc. All rights reserved.