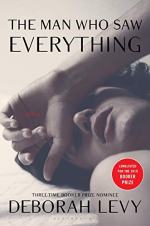 The Man Who Saw Everything Summary & Study Guide

The Man Who Saw Everything Summary & Study Guide Description

The Man Who Saw Everything Summary & Study Guide includes comprehensive information and analysis to help you understand the book. This study guide contains the following sections:

This detailed literature summary also contains Quotes and a Free Quiz on The Man Who Saw Everything by Deborah Levy.

The following version of this book was used to create this guide: Levy, Deborah. The Man Who Saw Everything. Bloomsbury Publishing, 2019.

The Man Who Saw Everything by Deborah Levy tells the story of a young British student in the 1980s, named Saul Adler, who visits the communist country of East Germany and relives these experiences in a delusional state after being seriously injured in a car accident in 2016.

The novel begins on Abbey Road in London in 1988, the location where the British rock band The Beatles recorded their famous album Abbey Road. Saul is hit by a car while crossing the road at the location where The Beatles posed for a photograph for the album cover. Saul assures the driver that he is alright, but the driver seems unconvinced by many of the things Saul tells him.

Saul’s girlfriend Jennifer arrives and takes a photograph of Saul crossing the road in the style of the album cover. Saul is going on a research trip to East Germany and intends to give the photograph to one of his hosts as a present because she loves The Beatles. Saul and Jennifer return to Jennifer’s flat. Saul asks Jennifer to marry him and Jennifer abruptly breaks up with him. As Saul leaves, Jennifer reminds him not to forget to buy a tin of pineapple which has been requested by his East German hosts. Saul forgets to buy the pineapple.

Saul arrives in East Berlin and is greeted by his host and translator, Walter Muller. Saul goes to stay with Walter’s mother, Ursula, and his sister Luna. Walter invites Saul to spend the weekend at Walter’s cottage in the countryside. While there, Saul and Walter have sex. On Luna’s birthday, Ursula presents her with a cake decorated with tinned peaches which upsets Luna because she was expecting pineapple. Luna and Saul spend a weekend together at the cottage and they also end up having sex. Luna asks Saul to help her escape from East Germany and Saul refuses, telling her that he is in love with her brother Walter. Luna tells Saul that Walter is married and has a child and Saul destroys Luna’s prized copy of The Beatles Abbey Road album in anger.

Saul pays a man named Rainer to arrange for Walter to escape from East Germany. When Saul reveals this to Walter, Walter is horrified and tells Saul that he does not want to leave his country and that Rainer works for the Stasi, the East German secret police. As Saul is about to leave the country, he sees Walter approached by a van and Saul fears that Walter will be arrested as a result of Saul’s actions.

The narrative of the novel undergoes a dramatic shift after the chapter in which Saul leaves East Germany. In 2016, Saul is once again hit by a car when crossing Abbey Road in London and it becomes apparent that the earlier chapters are Saul’s delusional memories and hallucinations which he experienced after the car crash in 2016. Due to his injuries, Saul believes he is still 28 and has just returned from East Germany, even though he is now 51 years old.

Saul’s ex-girlfriend Jennifer is at Saul’s bedside and it is gradually revealed that they had a child together, named Isaac, shortly after Saul returned from East Germany. Isaac died when he was four years old.

Saul recalls that he returned to Berlin after the fall of the Berlin Wall and the reunification of Germany and visited Walter. Walter told him that Luna had disappeared after trying to escape from East Germany and that no one had heard from her again. She had left behind her baby son, Karl-Thomas. Walter’s wife asked Saul to contribute some money towards helping them raise Karl-Thomas. Later in his life, Saul visited Walter a final time, by which time Karl-Thomas was in his early twenties and looked very similar to the way Saul looked at that age.

In the hospital in 2016, Saul was filled with remorse over his treatment of Walter which resulted in Walter being arrested and interrogated by the Stasi. In his delusional state, Saul could no longer remember his life with his long-term partner Jack, who sat by his bedside in the hospital. Saul told Jack that he did not want his love and Jack criticized Saul for his cruelty.

Saul told Jennifer that he wanted to go to Abbey Road again and she humored him by pretending they were there, while Saul lay dying in his hospital bed. The novel ends with a delusional Saul hallucinating that he is once again crossing Abbey Road where he sees Luna on the other side.

The Man Who Saw Everything from BookRags. (c)2022 BookRags, Inc. All rights reserved.